If forced to decide between legacy pay-TV or SVOD services, 57% of dual-service users would choose legacy pay-TV, 43% streaming services like Netflix and Hulu.T

his according to new insights from TDG’s 7th annual Benchmarking the Connected Consumer study.

“One would be excused for thinking the difference would be more dramatic,” notes Michael Greeson, President of The Diffusion Group.

“After all, one is a multi-channel TV service with live primetime shows, even live sports; the other an on-demand service with no live programming. Apples and oranges, right?”

So much for conventional wisdom. As it turns out, four-in-ten TV viewers choose SVOD over legacy pay-TV. “No, this does not yet constitute perceptual parity,” says Greeson. “But there is no doubt that SVOD has taken and is taking a growing part of mainstream mindshare, especially among younger viewers.” 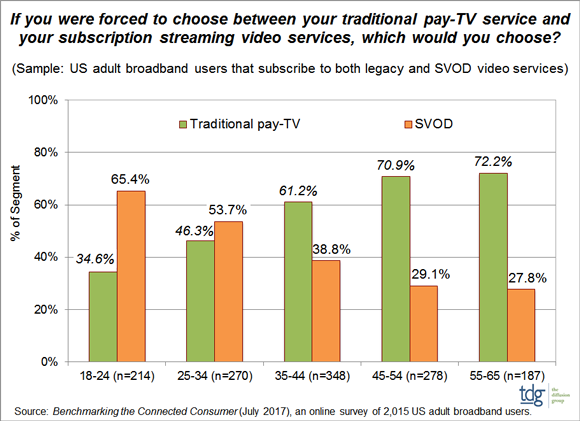 TDG’s analysis found convincing evidence that this choice is largely a factor of age. In fact, the relationship is strikingly linear. As illustrated, 65% of 18-24s would select SVOD over legacy pay-TV, a rate that declines as age increases. Conversely, 72% of 55-65s chose legacy pay-TV over SVOD, a rate than declines as age decreases.

“The stage is set. The question now is whether pure-play broadband pay-TV providers—those without legacy assets, like Hulu TV—can capitalize on the opportunity.”

Unlike legacy providers that also offer an vMVPD service like Sling TV and Dish, pure-play BPTV operators have no conflict of interest in transitioning SVOD users to multi-channel subscribers. The new revenue will be accretive to ARPU, not dilutive, as the linear package also includes the SVOD service. Cannibalization is thus not a concern for virtual operators as it is for the growing number of legacy providers now dabbling in multi-channel streaming services.

Wi-Fi 6 and Wi-Fi 6E client devices are entering the home in an unprecedented way, surpassing 50% market share since their introduction in 2019 (compared to four years for Wi-Fi 5). … END_OF_DOCUMENT_TOKEN_TO_BE_REPLACED