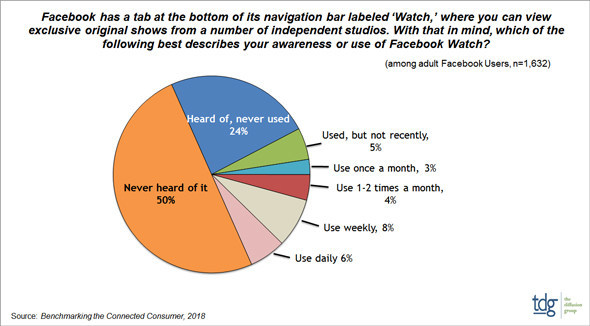 Despite the fact that Facebook’s free ad-supported Watch on-demand video service launched just over a year ago, the offering continues to face significant challenges regarding feature awareness and use.

This according to new research from The Diffusion Group (TDG), which found that half of adult Facebook users have never heard of the free Watch video service, while 24% have heard of it but never used it, despite the fact that Watch is featured on the social network’s navigation bar and marketed heavily within the Facebook app.

In mid-2018, TDG surveyed 1,632 adult Facebook users regarding their awareness and use of Facebook’s ‘Watch’ tab. According to this survey, 21% view shows on Watch at least monthly, 14% at least weekly, and 6% at least once a day.

While Watch is populated by content from a number of independents, legacy studios are finding ways to dip their toes into Watch, and with some success. For example, ABC’s TV Station Group launched Localfish, a digital-first media brand, whose More in Common debuted in July 2018 and has to date gathered five million views and 50,000 subscribers.

“Despite the slow build of Watch users, it would be remiss to underestimate Facebook’s long-term potential as a large-scale video provider,” notes Michael Greeson, President of TDG.

“As we first noted in 2016, prominent social platforms like Facebook are looking for ways to exploit their massive scale to sell new video services to their users, much as Amazon has done with Prime. Watch is a small first step in that direction, as is the $1 billion Facebook set aside in 2018 to fund original programming to populate the service.”

Greeson notes that Watch was never intended to generate Amazon-size audiences, and Facebook will continue to tweak the formula until it sees the results it seeks. And it has the cash to wait for years to make this happen.

“This is why technology companies are so dangerous to legacy media companies. Pure-play video, music, or gaming operators must survive on revenue and profits from those services, whereas Facebook, Google, Apple, and Amazon have such deep pockets and vast business empires that they can spin up a service in short order and lose money on it for years if it serves a higher purpose, like keeping Facebook users in the branded ecosystem for longer. For large tech companies, media services are commonly a means to a larger end, not ends in themselves.”

Wi-Fi 6 and Wi-Fi 6E client devices are entering the home in an unprecedented way, surpassing 50% market share since their introduction in 2019 (compared to four years for Wi-Fi 5). … END_OF_DOCUMENT_TOKEN_TO_BE_REPLACED