The latest research by Ampere Analysis focuses on Critical Ratings of US SVOD titles.

Ampere has formulated a score from 0-100, created from average user reviews gathered from leading ratings websites and film/TV databases. All titles referenced are available on US SVoD platforms.

The top 25 original shows
When looking at the top 25 critically acclaimed shows on each of the five leading US SVOD platforms, HBO and Netflix significantly outperform their rivals. However, the top two contrast sharply when looking at the age (average first release year) of their leading titles. HBO’s top shows are far older compared to Netflix. Netflix has only been in the originals game since 2013 (House of Cards) and has a much newer catalogue of top shows. 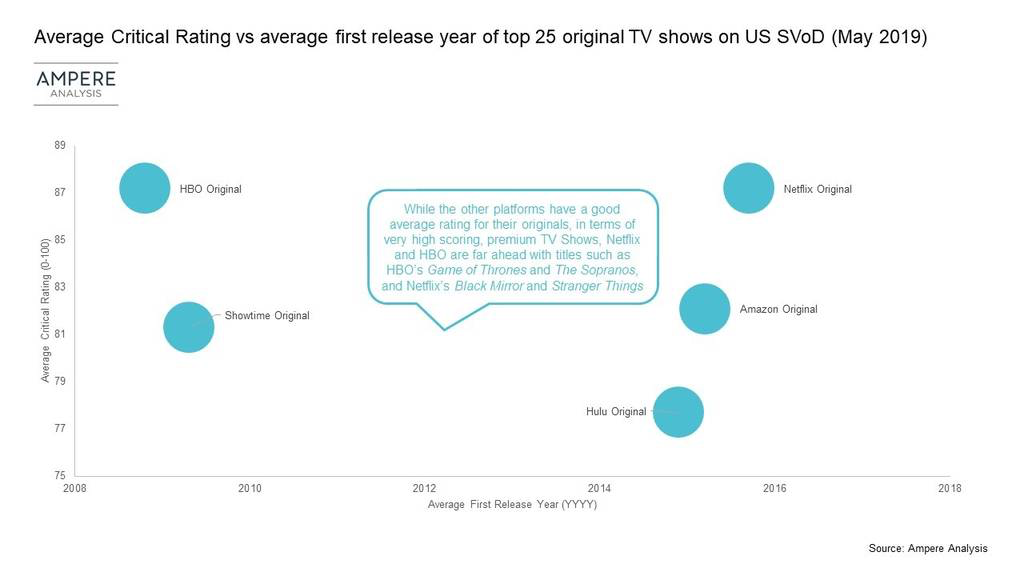 The bigger picture on originals
When looking at Critical Ratings across the whole catalogue of original TV shows on the same five platforms, the picture is markedly different. HBO and Showtime come out on top. Netflix, with almost 400 original TV shows ranks significantly lower, slightly below Hulu and Amazon.

Lottie Towler, Ampere Analysis Analyst comments: “Netflix is by far the biggest commissioner of original TV shows with almost 400 on the service now and 287 in the pipeline. This focus on volume has, perhaps inevitably, created a number of big hits alongside some misses – lowering the overall Critical Rating for its complete original catalogue. HBO and Showtime, with far fewer original shows in their catalogues, have maintained a higher average Critical Rating.” 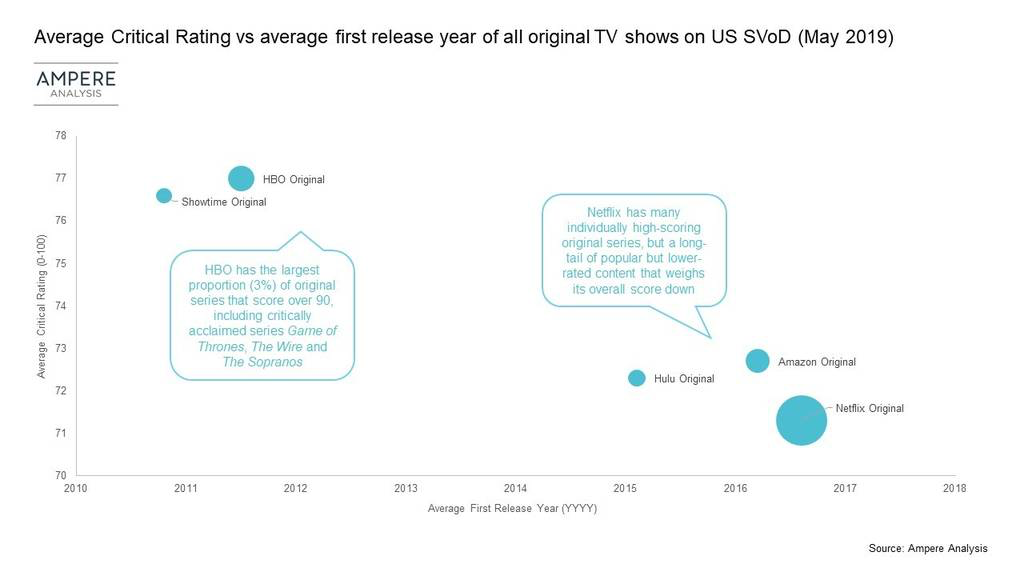 A number of HBO original TV shows including The Wire, The Sopranos and Rome appear in Amazon Prime Video’s top 15 rated content, but none of Amazon’s original content features.

Hulu’s top titles for TV shows featured only acquired content, with none of its originals making the top 15 on its platform.

HBO has the highest proportion of original content across the SVOD platforms covered. These original titles are on average older than the acquired titles in its catalogue, but of a higher average Critical Rating.

All 15 of the top TV Shows on HBO are HBO originals.

3% of HBO’s originals series score over 90 – these include The Sopranos, Game of Thrones and The Wire. This is the largest proportion of originals ring over 90 of the five SVOD platforms. HBO is the only catalogue that has recently improved its average Critical Rating.

Over half of the TV content available on Showtime is original content. Including popular series Dexter, they represent many of the highest rated titles within the catalogue.

Showtime’s top 15 TV shows are made up exclusively of their own originals including Californication, Homeland and The Tudors. 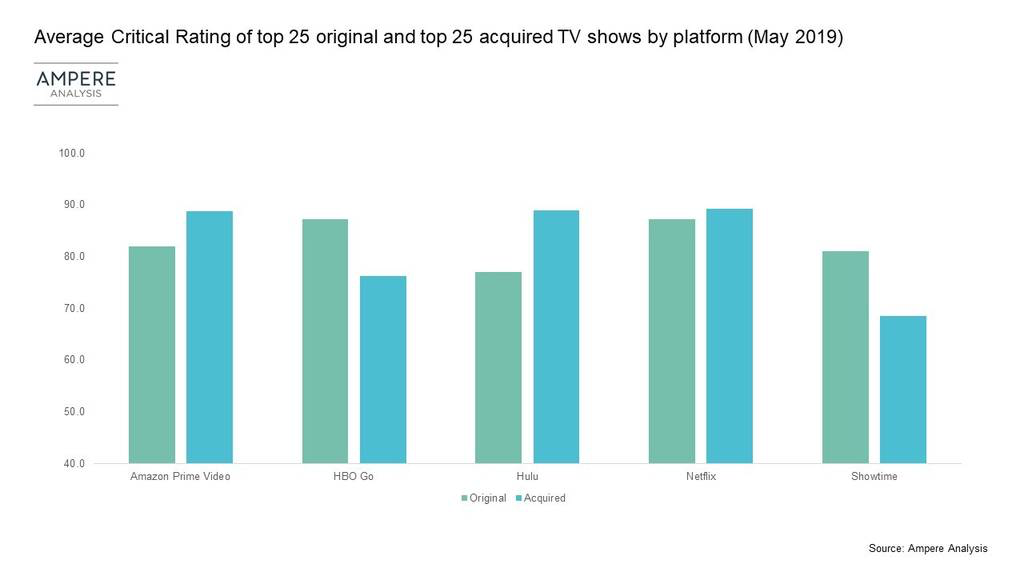 The best original vs the best acquired shows – how do the platforms perform?
Lottie Towler, Ampere Analysis Analyst comments: “With the exception of Showtime and HBO Go, acquired TV content outguns in-house originals in the US. Netflix’ top 25 original shows perform almost as well as its acquired content – both at a high level of critical acclaim. However, with highly rated series such as Friends and The Office set to leave the platform soon, the balance could shift in favour of Netflix originals. Hulu’s and Amazon’s acquired shows significantly outshine their original productions.”

Wi-Fi 6 and Wi-Fi 6E client devices are entering the home in an unprecedented way, surpassing 50% market share since their introduction in 2019 (compared to four years for Wi-Fi 5). … END_OF_DOCUMENT_TOKEN_TO_BE_REPLACED