The percentage of Original movie and TV season titles on Netflix’s US catalogue grew significantly over the course of 2018 according to the latest report from Ampere Analysis.

In December 2016, just 4% of the catalogue was made up of Netflix Originals. This had increased to 11% by December 2018, as the streamer moves steadily away from relying on acquired content. 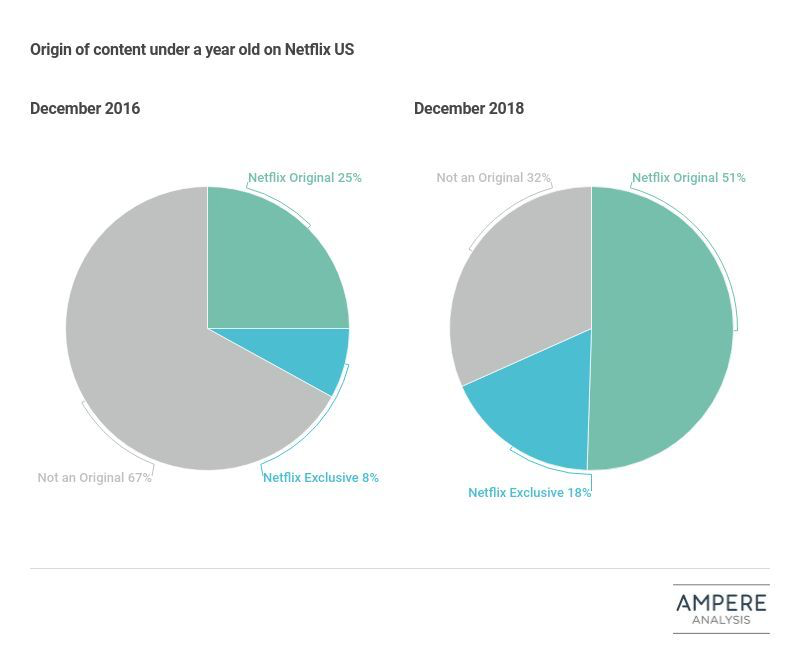 The extent of Netflix’s strategy to become self-sufficient becomes far more apparent when analysing the newest titles on the service – which are dominated by Originals. In December 2016, just 25% of titles released less than a year before were Netflix Originals. At this point, the vast majority of new high-profile titles were acquired. However by December 2018 the percentage of Originals had doubled to 51%, putting Netflix firmly in control of the rights of the majority of the new titles coming on to its platform.

Other services, such as Hulu and Amazon, continue to make notable volumes of Originals but focus more heavily on acquired content, with Originals representing just 1% of their catalogues. 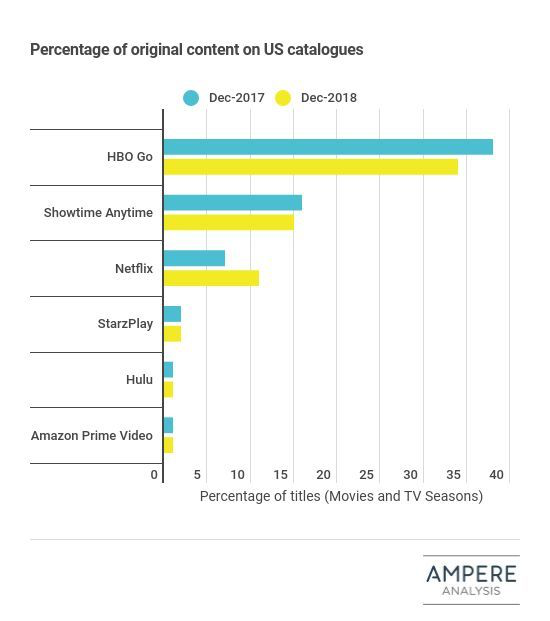 The facts
– Netflix’s rapid transition towards a premium TV model comes at a time when it faces a threat from major production companies pulling content as they prepare to launch DTC services
– 30% of Netflix’s US catalogue is content from major US studios, but that has already decreased as some production companies – including Fox and Disney – remove the majority of their titles
– Netflix has simultaneously been pushing internationalization of its content, fuelled in part by its focus on Originals to which it owns worldwide rights, but also by a growing volume of pan-regional or global ‘Exclusives’ (titles like Star Trek: Discovery – not produced by Netflix, but acquired exclusively in almost all of their markets)
– In December 2017, over 3,000 titles available on Netflix UK were available in more than 15 Netflix markets worldwide. In December 2018 this had increased by a further 1,600 titles.

Lottie Towler, Analyst, says: ““Netflix’s strategy is clearly moving towards a self-sufficiency model. Its focus on growing the proportion of Original content in its catalogue shows no sign of slowing down – in fact Ampere’s analysis shows the streaming giant is reaching a point where it produces almost all the new and fresh content, while only the older content is licenced. This will position Netflix well in the market should other major studios follow in the steps of Fox and Disney and pull their content from SVoD services in advance of launching their own DTC offer.”

Wi-Fi 6 and Wi-Fi 6E client devices are entering the home in an unprecedented way, surpassing 50% market share since their introduction in 2019 (compared to four years for Wi-Fi 5). … END_OF_DOCUMENT_TOKEN_TO_BE_REPLACED