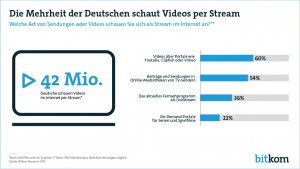 Video streaming has established itself in Germany with more than three quarters of all internet users (76%) consuming streaming video.

This corresponds with over 42 million people – two million more than one year ago. The figures are the result of a survey conducted by Bitkom Research on behalf of German industry association Bitkom among 1,014 people above 14 years of age.

“Streaming fundamentally changes media consumption. Today, users watch exactly the content they want to see at any time and any place with any device connected to the internet,” Bitkom’s managing director Bernhard Rohleder said in Berlin.

The share of people downloading movies remains small: Only one in four internet users (25% download videos to watch them. “Constantly faster broadband connections make it possible to stream videos even in high resolution mostly without waiting time,” said Rohleder.

The most popular streaming destinations are portals like YouTube, MyVideo, Clipfish or Vimeo. Six out of ten internet users (60%) use them to watch free videos. More than one in two internet users (54%) access TV content on broadcasters’ catch-up services while more than every third internet user (36%) watches linear TV channels as a live-stream.

Wi-Fi 6 and Wi-Fi 6E client devices are entering the home in an unprecedented way, surpassing 50% market share since their introduction in 2019 (compared to four years for Wi-Fi 5). … END_OF_DOCUMENT_TOKEN_TO_BE_REPLACED