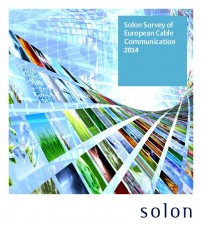 The largest European cable operators expect an accelerated growth with an average turnover increase of 6% per year until 2016. Two years ago, they expected a yearly increase of 5%.

At the same time, the cable companies expect an increase in profitability with the average EBITDA margin to reach 51% in 2016.

The figures are taken from the Solon Survey of European Cable Communication 2014 for which German consultancy Solon Management Consulting interviewed top management executives of 14 leading European cable operators in 12 countries. The company conducts the survey every two years in cooperation with industry association CTAM Europe.

The survey results show that the cable industry’s attention is focused on Next Generation TV in which it faces increasing competition from ADSL and fibre network operators and – in pay-TV – from companies such as Netflix and Amazon.

“Cable operators have the choice to compete with companies such as Amazon Instant Video or Netflix by developing their own video-streaming products or to integrate them into their offerings. The assessment of both strategic alternatives is largely driven by a company’s competitive position,” Matthias Hamel, managing director of Solon Management Consulting, said in Munich. “However, recent trends see a development towards the latter strategy: the integration of these video-streaming platforms.”

Broadband is by far the largest revenue and EBITDA growth source for the industry, a development mainly driven by significant increases in download speeds. The primarily marketed bandwidth of European cable operators was on average 48Mbps in the first half of 2013. By 2016, cable players expect this figure to increase to over 150Mbps.

“Cable players will continue to utilise their network advantages. Standard products with over 150Mbps download speed and top products with much higher throughput represent a challenge to all competing infrastructures,” said Hamel. “VDSL and vectoring for example are not able to deliver comparable bandwidths.”

In terms of new customer segments, the cable industry especially focuses on business clients. B2B is perceived to be the second-largest growth driver until 2016 after broadband.

Hamel sees great potential, but also corresponding challenges: “There is no reason to assume that cable operators should not be able to replicate their B2C success with SME customers. The challenges relate to medium-sized companies which demand more complex products and customer care as well as different sales approaches.”

A summary of the Solon Survey of European Cable Communication 2014 can be downloaded free of charge from Solon’s website.

Wi-Fi 6 and Wi-Fi 6E client devices are entering the home in an unprecedented way, surpassing 50% market share since their introduction in 2019 (compared to four years for Wi-Fi 5). … END_OF_DOCUMENT_TOKEN_TO_BE_REPLACED