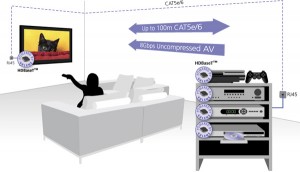 LG Electronics, Samsung Electronics, Sony Pictures Entertainment and Valens Semiconductor have announced that they intend to launch a cross-industry alliance to promote and standardize the HDBaseT technology for distribution of uncompressed HD multimedia content.

The HDBaseT Alliance plans to create a global standard for advanced digital media distribution. The Alliance’s standardization activities will cover the entire value chain of the digital media ecosystem and the various market segments: TV sets, projectors, professional AV equipment, home theater, content providers, IT companies and more. Parties from the consumer electronics and the content industries will work together.

Consumers are looking for a way to connect TVs and other display equipment with entertainment devices, such as a Blu-ray DVD player, for in-home converged distribution of HD multimedia content. Some of the existing technologies are limited in terms of bandwidth and cannot support uncompressed video. The demand for in-home converged distribution of HD multimedia content and the lack of adequate existing technologies are driving the industry toward an HD digital connectivity standard such as HDBaseT, which increases distance of uncompressed HD multimedia content transfer, expands distribution, simplifies installations and lowers overall system cost.

“As the demand for high-quality HD content distribution in the entire home is already huge, we are hoping that HDBaseT will play the trigger role in advancing this market, since HDBaseT enables simultaneous multi-room distribution of uncompressed HD Multimedia as well as data, control and power over a single CAT5e cable,” said ByungJin Kim, research fellow, LG Electronics, in a statement.

“We firmly believe that in today’s industry a standard must have broad consensus and support from the major players in the industry. For this purpose, we are actively working with such leading companies across the value chain to assure broad support and active participation in the newly formed HDBaseT Alliance,” said Dror Jerushalmi, CEO, Valens Semiconductor.

The four founding companies say that the Alliance is expected to release new details about more global leaders joining the Alliance in the upcoming weeks.

Wi-Fi 6 and Wi-Fi 6E client devices are entering the home in an unprecedented way, surpassing 50% market share since their introduction in 2019 (compared to four years for Wi-Fi 5). … END_OF_DOCUMENT_TOKEN_TO_BE_REPLACED