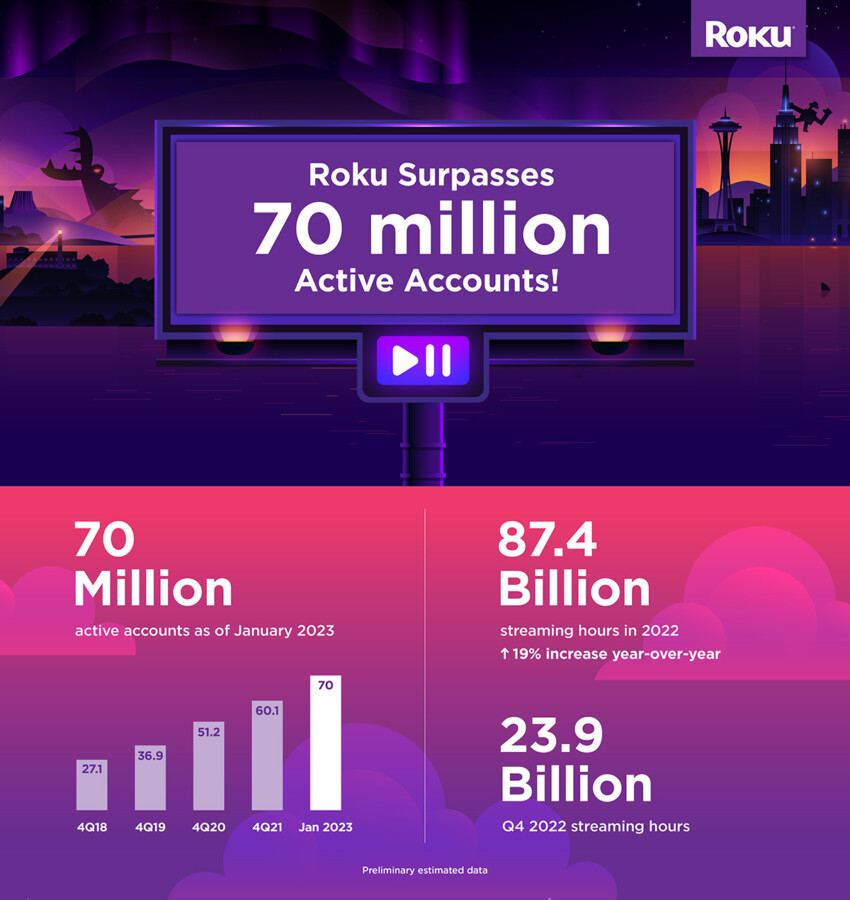 Roku has received a new year boost with the news that its streaming business has reached a new milestone in active accounts and its highest-ever streaming hours.

The San Jose company has announced the number of global active accounts now exceeds 70 million, representing a 10 million increase on the same period in 2022.

Globally, streaming hours were 23.9 billion in Q4 and 87.4 billion for full-year 2022, a 19% increase year-over-year. Roku remains the Number 1 TV streaming platform in the United States, Canada, and Mexico based on hours streamed.

“As consumers continue the shift to TV streaming, we’re excited that a growing number of people are taking the journey with Roku, and we’re proud to reach this meaningful milestone today,” said Roku Founder and CEO Anthony Wood. “Roku is laser-focused on delivering affordable, easy-to-use products and an operating system that makes streaming accessible to all. We look forward to continuing to bring innovative and delightful experiences to more and more viewers this year.”

Roku’s active account milestone was reached as the company announced its first-ever Roku-branded TV. The launch of Roku Select and Roku Plus Series TVs are the first ever to be both designed and made by Roku

Roku Select and Plus Series TVs will be available in the United States in spring 2023.

Wi-Fi 6 and Wi-Fi 6E client devices are entering the home in an unprecedented way, surpassing 50% market share since their introduction in 2019 (compared to four years for Wi-Fi 5). … END_OF_DOCUMENT_TOKEN_TO_BE_REPLACED