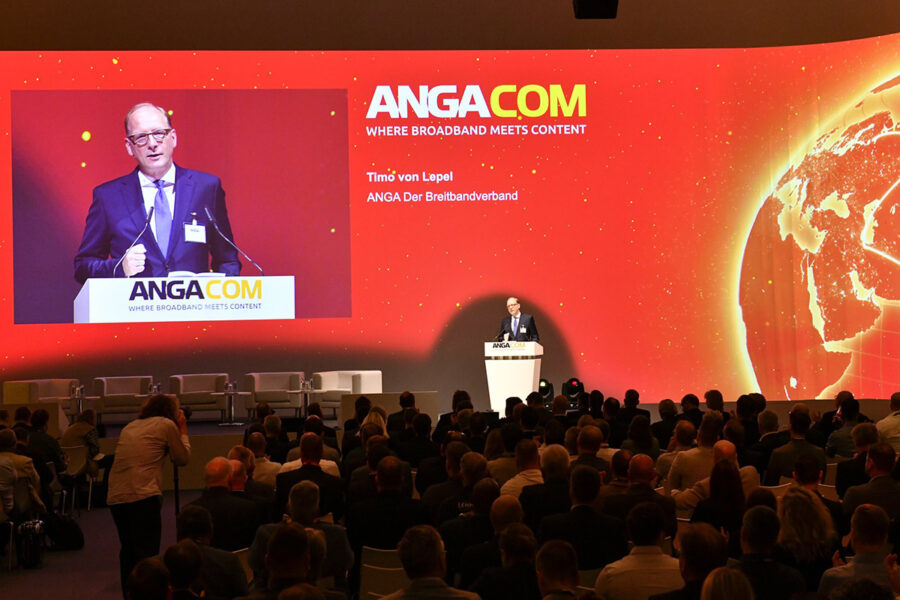 After a two-year Covid-induced absence ANGA COM has returned to Koeln Messe.

“If you read the business papers you’ll be happy, more than 50 billion Euros being invested in broadband in Germany, and that’s a strong sign for us,” said von Lepel.

He said the industry needed to walk a tightrope between the state and private sector and called for the cutting of Red Tape. “every municipality with its permits slows us down, so if you opt for digitisation you need to have less bureaucracy to make it happen.”

The theme was picked up in the following panel where Deutsche Telekom’s Srini Gopalan bemoaned the 21 different approvals required to dig up a street.

The panellists were united in their support for the coalition government’s plans to digitise Germany, but there was concern that the government wasn’t moving fast enough, creating some uncertainty in how to proceed. Gopalan believes the industry should just get on with it. “We can’t say for all difficulties we need regulation, yet we need deregulation at the same time.”

Given the expense of fibre installation there were calls for the creation of open access networks, so that if one company was responsible for the upgrade, other companies could then use it. Von Lepel pointed out that if one area was upgraded by multiple operators, another operator would be required to wait. But there was concern that by working together, operators didn’t create competition issues: “We believe in infrastructure competition, we can’t say you build here, and I’ll build over there,” said Gopalan.

However, the opening session was able to create a sense of relative positivity for the three days ahead. “If you go back a few years gigabit wasn’t even a topic in Germany, so if we’re lagging behind now, think of where we’ve come from,” said Vodafone’s Andreas Laukenmann, adding that while Vodafone has 1.3 million customers with a gigabit service over HFC, the cabling in individual buildings was sometimes lacking.

Wi-Fi 6 and Wi-Fi 6E client devices are entering the home in an unprecedented way, surpassing 50% market share since their introduction in 2019 (compared to four years for Wi-Fi 5). … END_OF_DOCUMENT_TOKEN_TO_BE_REPLACED