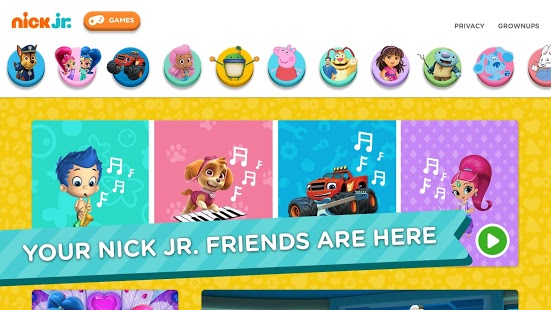 Nickelodeon is launching the Nick Jr. Play app globally, starting in the UK and Denmark and additional markets to follow in the coming months.

Nick Jr. Play is available for download today on iOS and Android, with multi-language support.

Nick Jr. Play is the latest addition to Viacom Play Plex, a suite of mobile apps for each of Viacom’s international brands which include Nick Play, MTV Play, Comedy Central Play and BET Play.

In Denmark, Nick Jr. Play will be available through a partnership with YouSee and available via YouSee’s advantage program for mobile, TV and broadband subscribers. The Danish launch offering will also include Nickelodeon Play.

“Nick Jr. Play combines some of preschoolers’ most beloved programming with interactive play that families can do together from the comfort of home,” said Kate Sils, VP multiplatform and brand engagement, Nickelodeon International.

“We’re excited to expand this offering internationally, and invite many more children and parents from across the world to engage and learn with all of their Nick Jr. friends while on the go.”

Wi-Fi 6 and Wi-Fi 6E client devices are entering the home in an unprecedented way, surpassing 50% market share since their introduction in 2019 (compared to four years for Wi-Fi 5). … END_OF_DOCUMENT_TOKEN_TO_BE_REPLACED