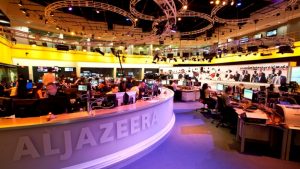 “These attempts are gaining intensity and taking various forms. However, the platforms have not been compromised,” according to the media company.

However, the attack on Al-Jazeera is apparently not a denial-of-service attack, as the websites remain available. The TV channels are also not affected.

Qatar said last month its state news agency had been hacked and false statements attributed to the country’s ruler posted, helping ignite the current rift with other Arab states.

On April 8, 2015 at 8:48pm the French international broadcaster TV5 Monde fell victim to an unprecedented attack by a group of Russian hackers. The hack was successful, as all websites and channels were affected, costing the broadcaster millions of euros

Wi-Fi 6 and Wi-Fi 6E client devices are entering the home in an unprecedented way, surpassing 50% market share since their introduction in 2019 (compared to four years for Wi-Fi 5). … END_OF_DOCUMENT_TOKEN_TO_BE_REPLACED