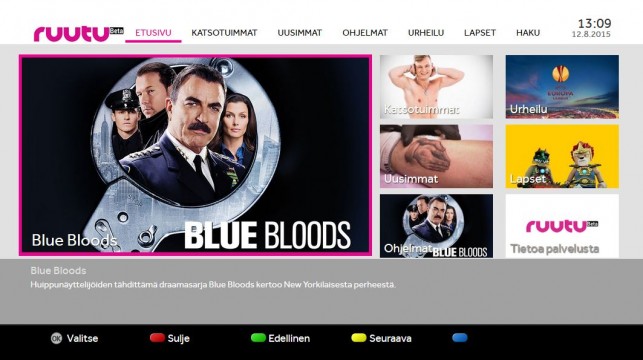 Viewers equipped with an HbbTV 1.5 receiver can use the service that matches what’s already available on web and mobile versions. The launch is running as a live beta and will be developed further according to viewer feedback.

Kai Taka-Aho, senior vice president, Online at Nelonen Media said: “You can restart a current programme by pressing a button on the remote control when you have the Ruutu application in a smart television and you can access other free-of-charge online content in the Ruutu service. For the viewer, this means an increase in content supply and the opportunity to watch a favourite programme at a suitable time on television. In addition, there is a new functionality that will allow the viewer to restart a programme and watch other episodes of the same series”.

Both the new Ruutu HbbTV service and Digita’s existing HbbTV platform are built on Sofia Backstage HbbTV solution which is deployed already in several markets in addition to Finland: Hungary, Estonia and Turkey.

Wi-Fi 6 and Wi-Fi 6E client devices are entering the home in an unprecedented way, surpassing 50% market share since their introduction in 2019 (compared to four years for Wi-Fi 5). … END_OF_DOCUMENT_TOKEN_TO_BE_REPLACED