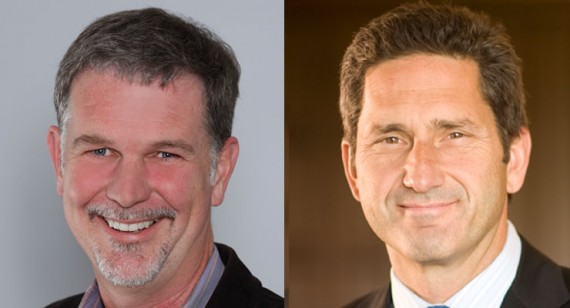 During this year’s gathering of cable marketeers, OTT providers such as Netflix cast a shadow – as everyone seems to be afraid of the threat of OTT.

Netflix CEO and founder Reed Hastings put everything back in perspective in his session with Mike Fries, when he said that just ten years ago “we were concerned about our DVDs not breaking in the postal sorting system.”

Hastings had a busy week launching the service in six new countries in Europe. This Friday, Netflix is launching in Belgium and Luxembourg following launches in Germany, France, Austria and Switzerland.

Launching in other countries is a big task for Netflix, “For most internet companies you just open up and are available worldwide. You don’t have to think country by country.We are different, we need to get content territory by territory.”

Reed was not ready to name future expansion plans, “we are looking at southern Europe and central and eastern Europe, but we haven’t reached a decision. We are not sure.”

The company is heavily investing in content and the business plan call for a period of three to five years before break-even. “That is in our excel sheets and it can of course vary by country. That’s what we judge success by.”

Looking at the future, Hastings said he believes 4K is “the first format that is internet centric. You don’t need tore-allocate spectrum, but content will just come to the homes that want it, so internet offers a much greater and faster upgrade cycle.

“And 4k is just the beginning of new upgrades, next will be a higher dynamic range and we can have more rapid format upgrades.”

As a plus for ISPs, “we can help sell them one Gigabit packages.” Reed said Netflix is actively talking to manufacturers such as Sony and Samsung, as they are in the process of finding out “what smart TV is.”

Mike Fries, CEO and president of Liberty Global, said Netflix is great for everybody, but that it taught the company that its own “app needs to be better.” In the UK, where Netflix is available on Liberty Global’s Virgin Media, half a million homes downloaded the Netflix app on their TiVo box.

Fries countered that things get trickier if the entire customer base of 100% would pay for a service that 35% use. “It will be a challenge to get a settlement as we don’t see a market rate for this.”

For the moment, the two seem to remain ‘best of frenemies’, or as Fries out it “We compete with so many ISPs we couldn’t afford to play tricks with Netflix.”

Reed named Netflix “just one more supplemental entertainment expense.” In the US the portal has 35 million ‘member’. which is about one third of the 100 million cable and satellite DTH subscribers.

Wi-Fi 6 and Wi-Fi 6E client devices are entering the home in an unprecedented way, surpassing 50% market share since their introduction in 2019 (compared to four years for Wi-Fi 5). … END_OF_DOCUMENT_TOKEN_TO_BE_REPLACED