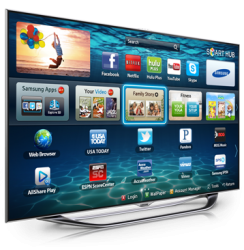 Samsung will introduce its UHD video pack in Europe this March.

The announcement was made at its European Forum 2014 event in Malaga, Spain. Samsung also announced partnerships with media companies such as Netflix and the Vienna State Opera for UHD content and movies from studios 20th Century Fox and Paramount.

The UHD video pack will come loaded with 4K content on a one Terrabyte hard disk.

“UK and Ireland are driving UHD trends at a very rapid pace—one of the reasons we’re so excited to bring Samsung’s ultimate immersive experience with our new lineup of UHD TVs to UK and Irish consumers”, said Guy Kinnell, head of TV and AV at Samsung Electronic UK & Ireland.

Samsung said it supports all of the latest UHD TV standards—including HEVC, HDMI 2.0, MHL 3.0 and HDCP 2.2—in an effort to build a holistic UHD ecosystem with premiere content partners.

The new Twin Tuner feature allows viewers to enjoy two different live TV programmes simultaneously. The recording scenarios are expanded, as they can now record two channels while watching one, or watch two things at the same time.

Samsung also said that its smart TV sets have one million users every week in the UK.

Wi-Fi 6 and Wi-Fi 6E client devices are entering the home in an unprecedented way, surpassing 50% market share since their introduction in 2019 (compared to four years for Wi-Fi 5). … END_OF_DOCUMENT_TOKEN_TO_BE_REPLACED