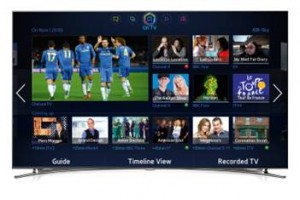 Samsung has announced that its UK Smart TV platform has more than 1 million unique weekly users.

The manufacturer had a market share of 50% of Smart TV sales during 2013. Unsurprisingly, it is the headline apps ITV Player, 4OD, Netflix, LoveFilm, Skype and BBC iPlayer that are the most

Guy Kinnell, head of TV and AV at Samsung Electronics UK & Ireland, commented: ‘With nearly 20 million Apps downloaded in the UK and 1 million weekly unique users, we know consumers are rapidly embracing the Smart TV platform. Samsung believes that Smart TVs will continue to be the central entertainment hub whether it’s via streaming movies, watching catch up content or speaking with friends and family via Skype.’

There are now some 650 apps available on the Samsung platform. ITV Player remains exclusive.

Samsung introduced its S Recommendation functionality as part of the 2013 range to aid content discovery.

Wi-Fi 6 and Wi-Fi 6E client devices are entering the home in an unprecedented way, surpassing 50% market share since their introduction in 2019 (compared to four years for Wi-Fi 5). … END_OF_DOCUMENT_TOKEN_TO_BE_REPLACED