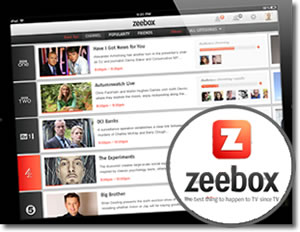 Furthermore, it has or will shortly be introducing a number of new features.

According to Anthony Rose, the company’s CTO and founder, these include voice recognition and ‘Zeetags’ firstly in the US, where the cross-channel TV viewing companion app made its debut in Q3 2012 in partnership with Comcast Cable, NBCUniversal, HBO and Cinemax.

Rose said that Zeebox is more than a TV guide and remote control, aggregating the five consumer wants of the 2nd screen – discovery, social, information, participation and shopping – in one place.

Asked about potential competitors such as Facebook and Twitter, he said that the former saw itself as a force for change and was probably looking to do something similar in TV to what it had already done in music.

Wi-Fi 6 and Wi-Fi 6E client devices are entering the home in an unprecedented way, surpassing 50% market share since their introduction in 2019 (compared to four years for Wi-Fi 5). … END_OF_DOCUMENT_TOKEN_TO_BE_REPLACED