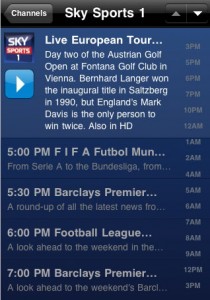 Sky has made its Mobile TV service available to users of the Apple iPhone and iPod Touch. The broadcaster has introduced a Sky Mobile TV App to Apple’s App Store that delivers live TV over Wi-Fi on payment of a £6 monthly fee. The available channels include Sky Sports, Sky Sports News, Sky News, ESPN and At The Races. The content is only available in the UK and some programmes are unavailable when Sky has been unable to secure the mobile rights. Landmark coverage such as the Premier League and Champions League is available.

David Gibbs, general manager for Mobile at Sky, said: “In less than a year we’ve already seen millions of downloads of Sky’s Apps from the App Store. Our new Sky Mobile TV App combines the demand for great live TV on the move with the high quality viewing experience offered by iPhone and iPod touch.”

Subscribers to the O2 mobile network can receive the first three months free, but only over Wi-Fi, rather than the operator’s 3G network. Other App Store retailers, including EchoStar, have expressed disappointment at being unable to offer versions that run video applications over 3G.

The new Sky Mobile TV App expands the range of apps that Sky has developed for the App Store. These include Sky+ Remote Record, Sky News, Sky Sports Cricket Score Centre and Sky Sports Football Score Centre. There have been 2 million downloads of Sky apps to date.

Wi-Fi 6 and Wi-Fi 6E client devices are entering the home in an unprecedented way, surpassing 50% market share since their introduction in 2019 (compared to four years for Wi-Fi 5). … END_OF_DOCUMENT_TOKEN_TO_BE_REPLACED