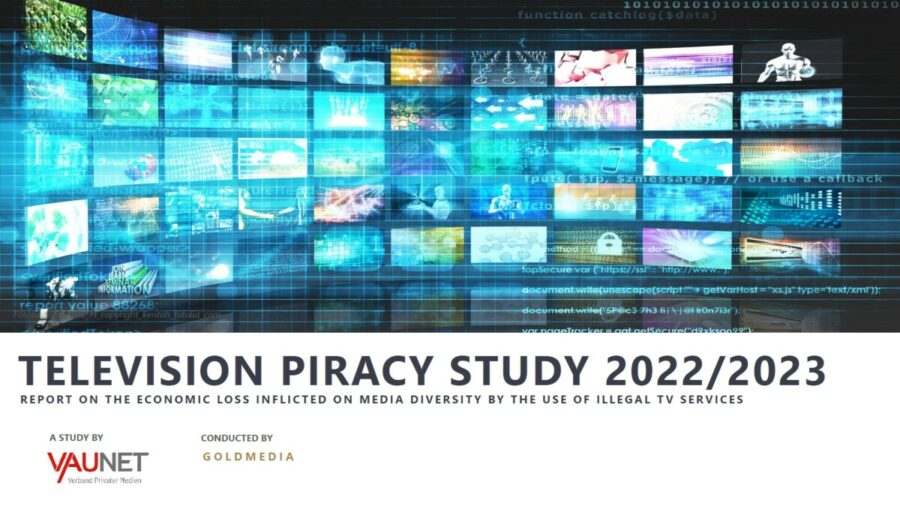 Watching illegal live content on TV was still widespread in Germany in 2022 and has increased in recent years, according to a new study consulting and research group Goldmedia compiled for industry association VAUNET.

A total of 5.9 million people regularly watched illegal live TV streams in Germany in 2022, according to the study. In most cases, live TV piracy replaces the use of legal TV services. The main live TV genres watched illegally are drama, sports and documentaries.

As a result, the media companies affected by piracy lose annual revenues totalling €1.1 billion, according to the study. The overall loss of revenue when upstream and downstream stages of the value chain are taken into account amounts to €1.8 billion annually. In return, the state loses taxes and social security contributions totalling around €390 million every year.

“The results of the study clearly show that the illegal consumption of live TV signals remains a mass phenomenon with serious economic and social consequences. Once again, we therefore appeal to the government and regulators: Live content needs live protection on the internet. We see no clear sign of support from Brussels or the German government, and demand changes be made promptly,” said Frank Giersberg, Managing Director of VAUNET.

According to the study, the amount of illegal use has increased since 2018. In 2022, 72% of those streaming live TV illegally did so at least once a week, up from 54% in 2018. The largest group is men aged between 24 and 33. However, use of illegal live TV streams was observed among the entire population between 24 and 63, the share of older users rising particularly strong in comparison to 2018. On average, those watching illegal linear TV streams in 2022 did so for an average of around 73 minutes per day.

The devices most commonly used were smartphones, PCs and laptops, along with apps and software installed on streaming sticks and boxes. Compared to 2018, access to illegal live content using apps and software has increased rapidly. Over half of those watching illegal streams in 2022 did so in one of these ways (2018: 36%).

An English-language summary of the Television Piracy Study 2022/2023 can be downloaded as a PDF here.

Wi-Fi 6 and Wi-Fi 6E client devices are entering the home in an unprecedented way, surpassing 50% market share since their introduction in 2019 (compared to four years for Wi-Fi 5). … END_OF_DOCUMENT_TOKEN_TO_BE_REPLACED