Pricing and bundling are key to retention in what is a maturing SVOD market in the US.

According to a recent report by Ampere Analysis, newer platforms (including Disney+) tend to have higher levels of both sign-up and churn as they rely more heavily on individual title launches, while established SVOD platforms’ sign-up and churn rates are much more affected by pricing changes.

Ampere’s latest analysis shows that bundling is key to help mitigate price sensitivity, with Hulu and Disney+ having both benefitted in terms of sign-up and churn from the strength of the Disney Bundle. 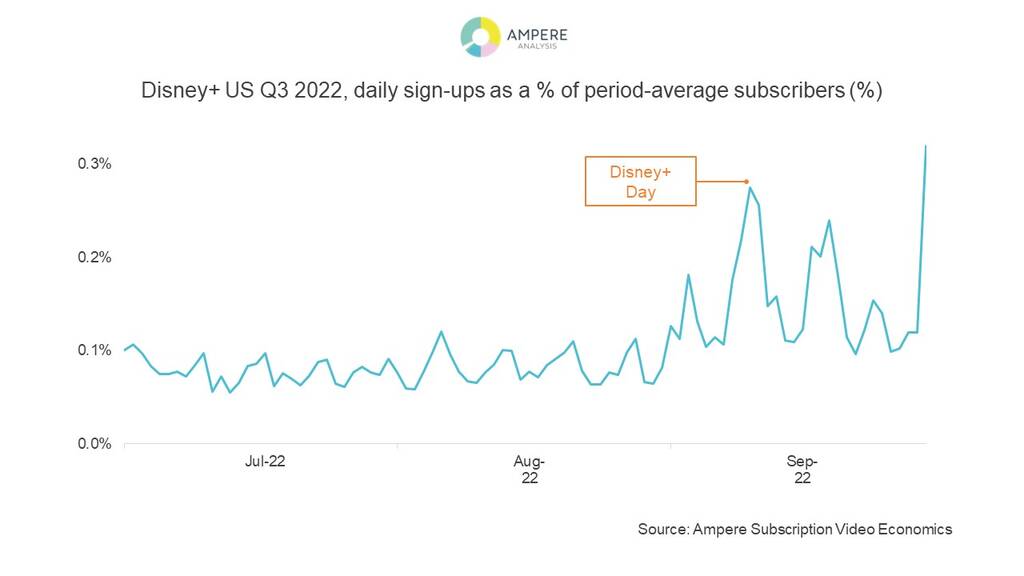 Ampere says that while newer SVOD players are continuing to see strong gross additions to their subscriber base, the increasingly saturated SVOD market presents growing challenges for established services to maintain success. As US consumers edge closer to the stacking ceiling, attracting new subscribers and mitigating churn is more important than ever.
It adds that for all SVOD platforms, leavers are primarily in younger, lower-income demographics, who are more sensitive to pricing and content offering. Discounted ad-supported tiers will mitigate churn here.

Another option to address price sensitivity is bundling. Hulu’s US sign-up and cancellation rates now mimic those of Disney+, as its users increasingly purchase their subscription through the bundle. Almost one third (32%) of Hulu subscribers have bundled with Disney+. 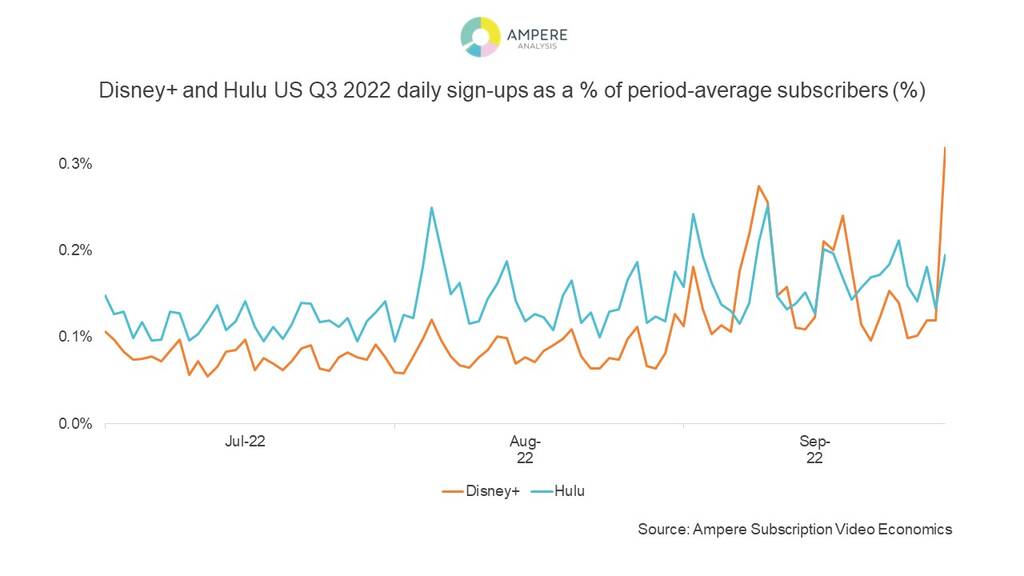 Ampere also notes that Disney+ uses franchise title releases and its first live broadcast to drive sign-ups. The first large peak in daily sign-ups seen on September 8 this year corresponds with Disney+ Day, an annual event that marks the release of exclusive premieres and the announcement of upcoming content. This year’s Disney+ Day saw the release of big franchise titles including Thor: Love and Thunder, Pinocchio, and Obi-Wan Kenobi: A Jedi’s Return. The next large peaks fall on September 19 with the premiere of season 31 of Dancing with the Stars, and on September 30 with the release of Hocus Pocus 2.

Commenting on the findings of the report, Mayssa Jamil, analyst at Ampere Analysis, said: “The increasingly competitive SVOD market makes it hard for established services to maintain growth, while newer players continue to see strong gross additions but struggle to retain those customers. Pricing and content offering being the main drivers for sign-up and churn, a great way to aid customer retention is through bundling: it combines both of the above by offering larger catalogues and more frequent content additions at cheaper prices. We see this at play when looking at the way Hulu and Disney+ sign up and churn rates increasingly mimic one another thanks to the strength of the Disney Bundle”.

Wi-Fi 6 and Wi-Fi 6E client devices are entering the home in an unprecedented way, surpassing 50% market share since their introduction in 2019 (compared to four years for Wi-Fi 5). … END_OF_DOCUMENT_TOKEN_TO_BE_REPLACED