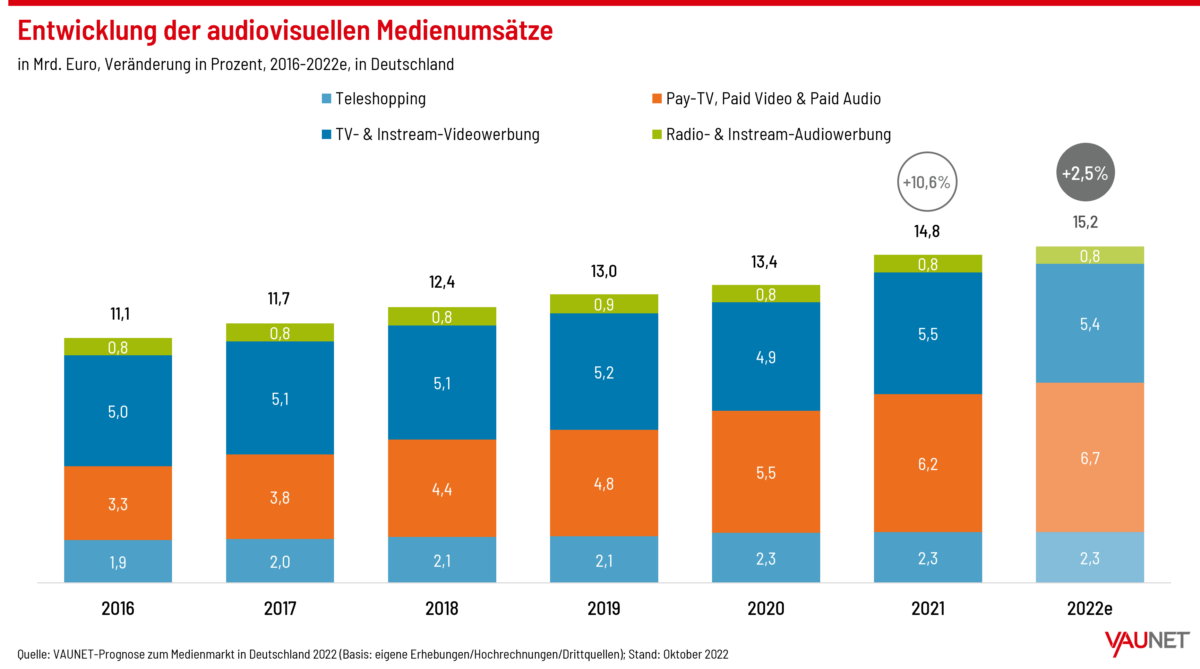 The total turnover of the German audio-visual media is expected to exceed the €15 billion mark for the first time in the current year with a growth of 2.5% (2021: €14.8 billion).

Subscription and advertising revenues in the area of audio and video streaming services will contribute a major part to the growth, while the effects of the tense overall economic situation can be seen in radio and TV advertising. This is the result of the German media market 2022 report presented today by industry association VAUNET.

For the net advertising revenues of all audio-visual media – radio, TV and advertising in streamed audio and video offerings – the association expects a decline of 2.2% in the current year. Television is affected by this negative development with an expected advertising revenue decline of 6% and radio of 3%. At the same time, advertising sales in the streaming market will continue to grow in double digits, but will not compensate for the declines in linear advertising.

“The current turnover figures of the audio and audio-visual media prove the high economic and social relevance of the industry. However, they also show dependencies on the overall economic development and, in the area of advertising-funded services, reveal effects of inflation and expected recession,” said VAUNET Managing Director Frank Giersberg.

“In this situation, the commercial media players are more dependent than ever on a fairer regulatory balance of competition with the licence fee-financed offerings of the public broadcaster as well as with global tech platforms. Irrespective of this, it must currently be ensured that the energy supply of audio and audio-visual media as part of the critical infrastructure is secured with high priority in the event of supply bottlenecks,” Giersberg added.

Wi-Fi 6 and Wi-Fi 6E client devices are entering the home in an unprecedented way, surpassing 50% market share since their introduction in 2019 (compared to four years for Wi-Fi 5). … END_OF_DOCUMENT_TOKEN_TO_BE_REPLACED