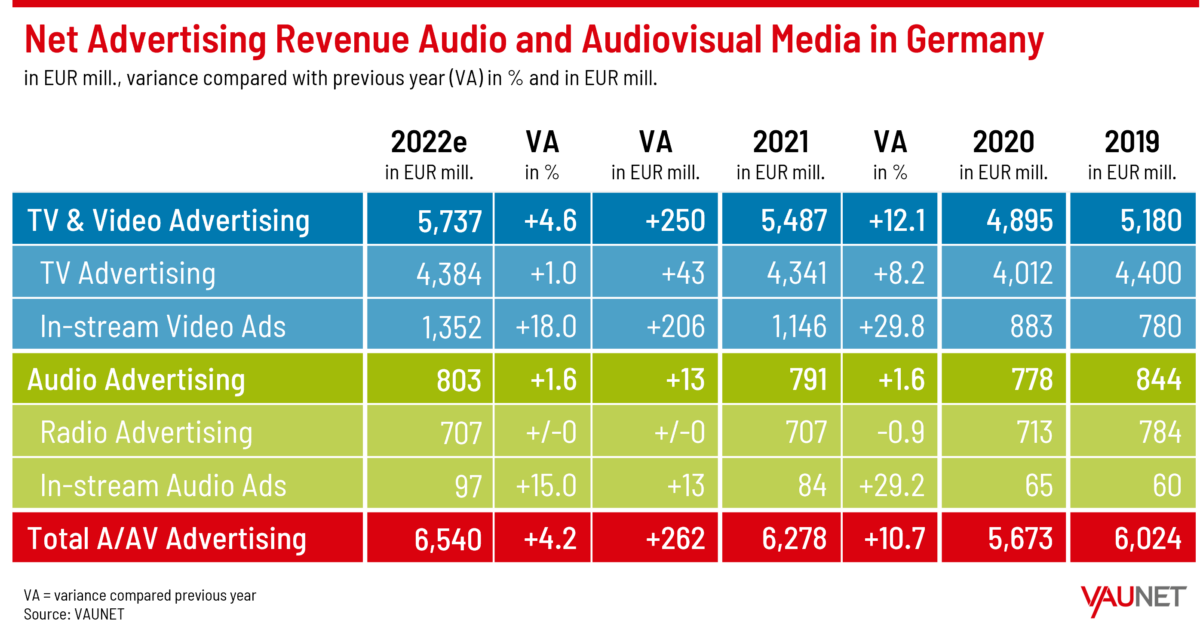 The German association of commercial media companies, VAUNET, expects advertising revenue in audio and audio-visual media in 2022 to rise by around 4.2% to a total of €6.54 billion (up from €6.26 billion in 2021).

The television sector looks set to record a small increase in turnover of 1% to €4.38 billion while revenue in the radio sector will likely remain stable at around €707 million. Despite the recovery of the industry as a whole, turnover in TV advertising will still remain slightly below 2019, with advertising revenue in radio significantly below this benchmark.

The overall positive development is mainly driven by revenue in streaming services, with double-digit growth expected again this year. These figures were released today by VAUNET in its spring forecast for the development of the advertising market in 2022.

“People are spending more time than ever using audio-visual media. Accordingly, advertising in audio-visual media is also becoming increasingly important for advertisers. And it makes a hugely important contribution to restarting the economy after the crisis. This applies to radio and television advertising as well as – albeit at a lower level – to video and audio streaming advertising,” said Frank Giersberg, Managing Director at VAUNET.

In 2021, TV advertising enjoyed 8.2% growth in revenue, while radio advertising declined by 0.9%. Streaming advertising revenues soared by 29.2% for audio and 29.8% for video. In particular, the strong growth in streaming meant that in 2021, the second year of the pandemic, advertising revenues in audio-visual media as a whole exceeded the pre-crisis level, rising by 10.7% on the previous year to reach €6.28 billion.

Wi-Fi 6 and Wi-Fi 6E client devices are entering the home in an unprecedented way, surpassing 50% market share since their introduction in 2019 (compared to four years for Wi-Fi 5). … END_OF_DOCUMENT_TOKEN_TO_BE_REPLACED