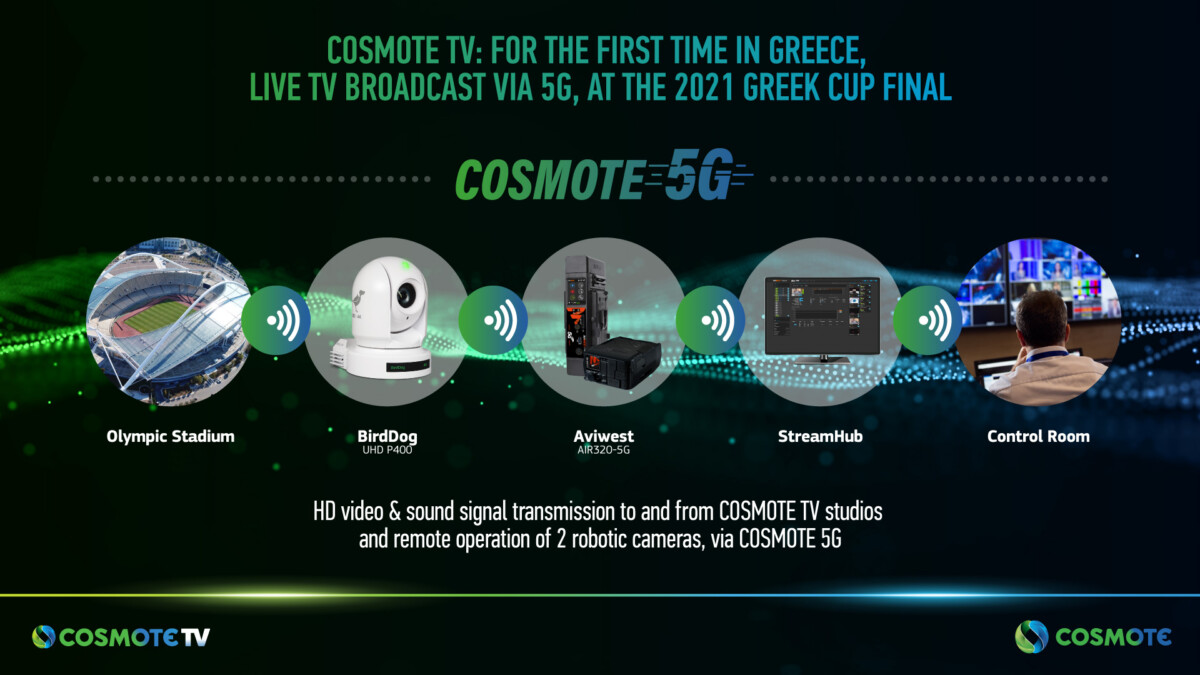 The first live TV broadcast via a 5G network in Greece has taken place during the Greek Cup final.

Cosmote TV moved ahead with a pilot application, which included remote control of two robotic cameras and transmission of audio and video via Cosmote 5G, without the use of fibre optic cables.

The two robotic cameras had special wireless 5G-ready equipment by Telmaco and were placed in the stadium’s arena. Their fully remote operation was achieved thanks to Cosmote 5G’s low latency, which enabled real-time response during the final. Precision control ensured that every key play in a match was fully captured on screen. The video recorded by the robotic cameras ‘travelled’ via Cosmote 5G directly from the stadium to the Cosmote TV studios, in HD audio and video, completely synchronised and with no delay.

Commenting on the development, George Tsonis, OTE Group’s executive director for network planning & development, said: “In the coming years, innovative applications that capitalise on 5G networks will change many sectors of the economy as we know them today. The pilot application via Cosmote 5G proves exactly this, creating new prospects for television broadcasts and production. As the first to bring 5G to the Greek market, we will continue to invest and work intensively to bring the benefits of this new technology across the country”.

Dimosthenis Vasilopoulos, the director of content and production operations at Cosmote TV, added: “Innovation is an intrinsic part of Cosmote TV. We are very happy to have carried out Greece’s first live TV broadcast via a 5G network. We are capitalising on every capability technology gives us, to offer our viewers the best possible experience in the most technologically advanced way”.

Wi-Fi 6 and Wi-Fi 6E client devices are entering the home in an unprecedented way, surpassing 50% market share since their introduction in 2019 (compared to four years for Wi-Fi 5). … END_OF_DOCUMENT_TOKEN_TO_BE_REPLACED