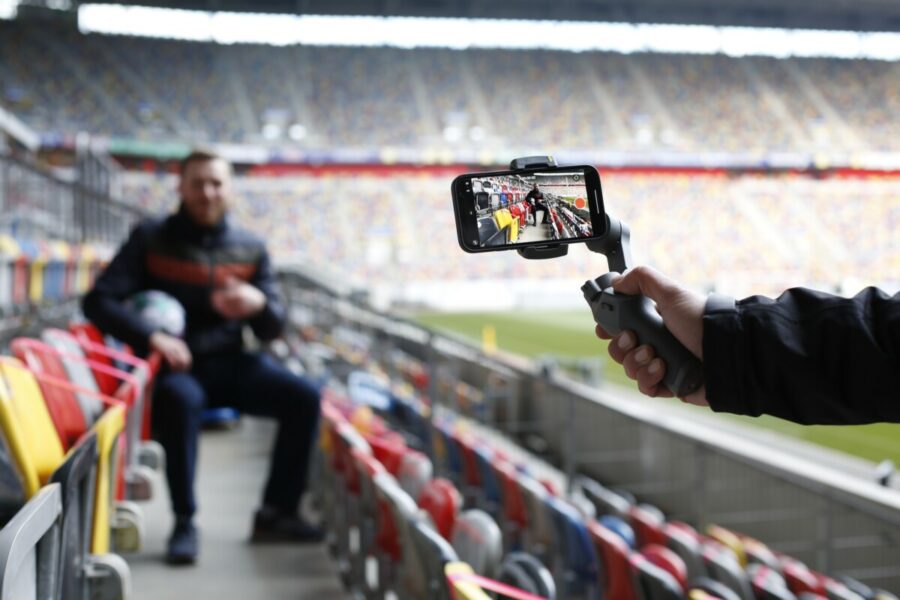 Sky Deutschland and Vodafone Deutschland are testing the use of the new 5G mobile network standard as part of the pre- and post-coverage of a live 2nd division Bundesliga football match for the first time.

Until now, the TV footage has traditionally been transmitted from wired cameras to the Sky OB van and from there to the studio via satellite or fibre-optic lines. With 5G, the path that the live images take until they reach the TV sets could be significantly reduced. Using 5G, the images from the wireless camera or smartphone go to the virtual studio in the cloud and then to the TV screen. Stable networks and guaranteed bandwidths are essential for this, even when thousands of people in the stadium access the network simultaneously.

Because the cameras would no longer have to be connected to numerous cables, camera people would be more flexible in their routes around the stadium and in their work. They would also be able to reach places that were previously difficult to access with a conventional camera. Football fans watching on TV would then be even closer to the action, according to Sky and Vodafone. With 5G, the smartphone also becomes a professional camera, because it can be used in any situation to capture the action. Especially when used for pre- and post-match coverage of sporting events, new angles and insights become possible. The live production of the match itself remains in the hands of DFL subsidiary Sportcast.

By capturing the action with smartphones, fans can also watch the live footage in the new 9:16 format, a format optimised for streaming with the smartphone, reflecting the growing number of viewers watching sports coverage while on the go.

To ensure that the transmission of the TV footage via 5G is stable and fast, Vodafone can cut out part of the network using the ‘network slicing’ technology, thereby ensuring stable data rates over the entire duration of a broadcast. Vodafone implements ‘network slicing’ together with its technology partner Ericsson. In future, TV broadcasters or companies will be able to book their own 5G network at short notice and for a limited period of time this way.

On December 16, 2020, the partners will test the mobile footage capturing for the first time during the 2nd division Bundesliga match between Fortuna Düsseldorf and VfL Osnabrück, which will be broadcast live by Sky Deutschland. Kick-off is at 18:30 CET. Vodafone has upgraded Düsseldorf’s Merkur-Spiel-Arena to one of the first 5G stadiums in Germany. Stadium visitors will also benefit from the fast mobile network, as they will be able to use speeds of up to 1Gbps.

Wi-Fi 6 and Wi-Fi 6E client devices are entering the home in an unprecedented way, surpassing 50% market share since their introduction in 2019 (compared to four years for Wi-Fi 5). … END_OF_DOCUMENT_TOKEN_TO_BE_REPLACED