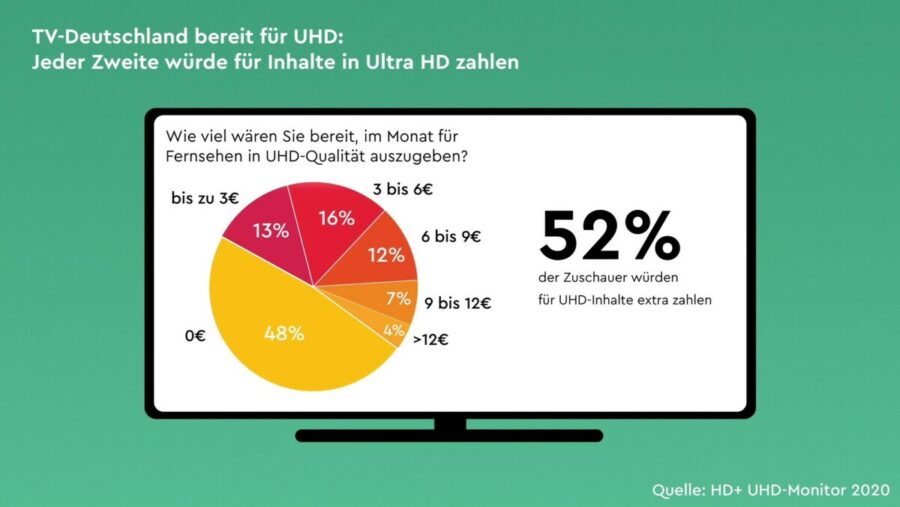 Ultra HD (UHD) is gaining popularity among German TV viewers. Seven out of ten households planning to buy a new TV set would opt for a UHD model.

One in two (52%) is prepared to pay extra for programmes in UHD quality, with movies and documentaries at the top of the wish list. These are results of the HD+ UHD Monitor 2020, a study by S&L Research on behalf of German DTH platform HD+, as subsidiary of Astra satellite operator SES.

This corresponds to the current sales figures of GfK: According to the market research institute, 70% of the TV sets sold in Germany in 2020 are UHD devices. This seems to be increasingly the case for second or third sets in a household. Two thirds of those surveyed in the HD+ UHD Monitor 2020 state that they use more than one TV set. 67% of them confirm that it is important to them that other TV sets in their household meet the same technical standard as their main set.

A further driver for the growing demand for UHD sets could be the declining satisfaction with the TV sets currently in use in households. Only one in three (35%) still considers the picture quality to be sufficient. The generally larger screen diagonals of UHD TV sets are also playing a role: Only 27% say that they do not need a larger flat screen.

However, when looking at the existing UHD offerings of the broadcasters, there is a great deal of uncertainty and unawareness. One in two (48%) of those surveyed do not know which TV channels already broadcast in UHD. When asked about UHD content providers, 20% named RTL, followed by Sky (18%), ProSieben (16%), ZDF (15%), SAT.1 (14%) as well as UHD1 by HD+ and RTLzwei (both 10%). However, channels which do not offer UHD at all were also mentioned, such as ARD (14%) or VOX (8%).

Knowledge about the advantages of a UHD device varies greatly. 72% of respondents cited better picture quality, 52% better colours and contrasts. But only 23% know that thanks to UHD, they can also place a larger TV set in their living room because the sitting distance to the TV set is practically irrelevant with UHD due to the high picture resolution.

Wi-Fi 6 and Wi-Fi 6E client devices are entering the home in an unprecedented way, surpassing 50% market share since their introduction in 2019 (compared to four years for Wi-Fi 5). … END_OF_DOCUMENT_TOKEN_TO_BE_REPLACED