Research by Ampere Analysis looks at the rise and rise of Subscription Video-on-Demand (SVOD) in the Asia-Pac region and, in particular, in Australia and New Zealand.

Subscription TV homes in Australia and New Zealand have already reached the inflection point where SVOD outstrips pay TV. Australia reached this milestone in 2017, and New Zealand in 2018. SVOD has also surpassed pay TV elsewhere in Asia-Pac including Thailand and Singapore – with Malaysia on the brink of achieving the turning point. The only Western European markets that come close in terms of SVOD outstripping pay TV homes are Denmark, Norway and the UK. 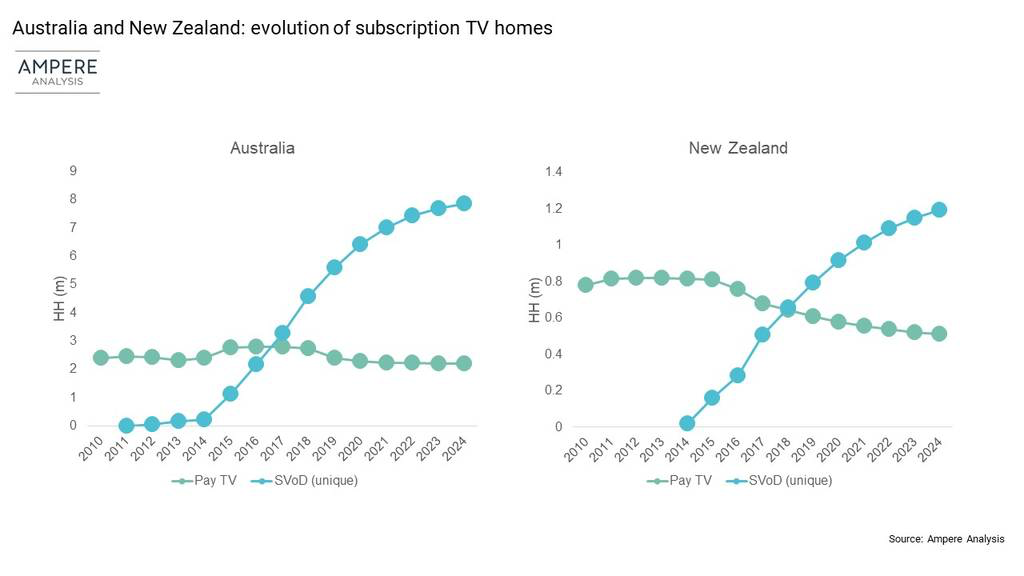 Overall, at 37%, SVOD penetration in APAC is above that of Western Europe which sits at 34%. Ampere predicts the household penetration of SVOD to reach 88% in Singapore, 64% in Australia and 42% in New Zealand by the end of 2019. This makes Singapore the country with the highest household SVoD penetration globally, followed by Norway, USA, Denmark and Australia in fifth place at 64%.

In Australia, Netflix is the gateway drug for content addicts
In the Australian market, almost half (49%) of those with SVoD at home subscribe to one service, one third (31%) subscribe to two services, and 21% take three. The number of households with three or more services increased from 13% in Q3 2017 to 21% by Q1 2019 – a large growth rate in under two years.

Netflix is the most common SVOD choice. 42% of SVoD subscribers take only to the service. Local player Stan performs well, with 16% taking both Stan and Netflix, 5% choosing to combine Foxtel Now, Netflix and Stan, and 1% opting for an Amazon Prime, Netflix and Stan combination. 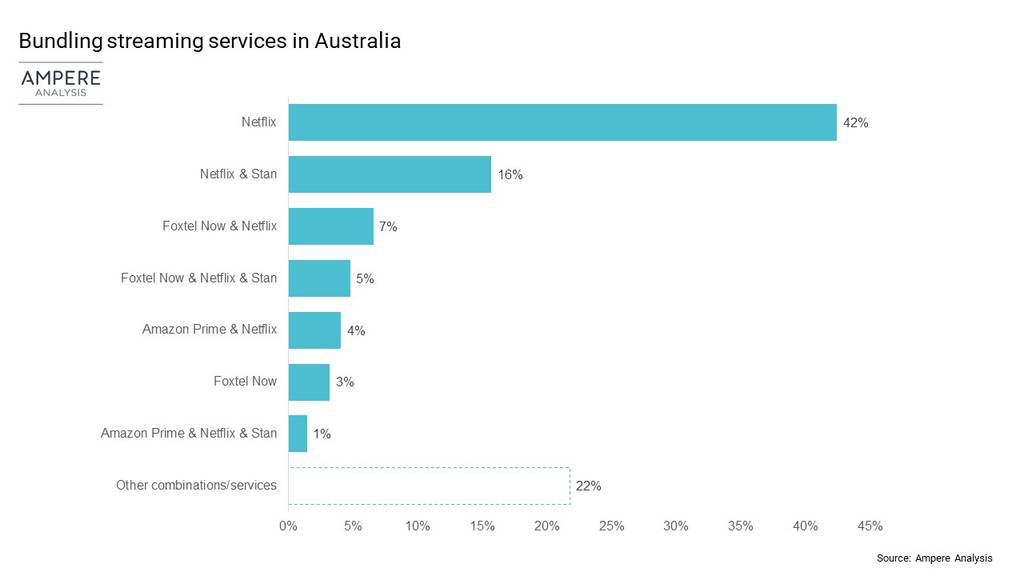 Room for growth in BVOD in Australia
Australian’s use of broadcaster catch-up (BVOD), bucks the global trend. Here it is flat, compared to the growth rates experienced in Western Europe. Comparing Australia to the UK, just 7.1% of streaming households view BVOD only in Australia, compared to 14% in the UK. Almost one half (47.6%) of Australia households view SVOD without using BVOD services, much higher than the UK’s 21%. The difference is also stark when it comes to combining SVOD with BVOD: Australia’s 22.6% is just under half of the UK’s 50.5% of the audience. This suggests there is plenty of opportunity for Australian broadcasters to improve their content offering to appeal to streaming households looking to curate their entertainment selection.

Guy Bisson, Director, Ampere Analysis Analyst says: “Australia is a hugely advanced market for streaming services and provides an interesting test case for the transition from traditional forms of paid TV distribution to the new. It’s no surprise that Disney has chosen Australia and New Zealand as two of the first four international markets for its direct-to-consumer streaming launches. If they are to stop Netflix dominating, local broadcasters need to evolve their own streaming platforms in order to maintain market and competitive position, leveraging strengths around local production and potentially co-operating on joint services and aggregation and navigation as well as exploring hybrid (mixed subscription/advertising) streaming business models.”

Wi-Fi 6 and Wi-Fi 6E client devices are entering the home in an unprecedented way, surpassing 50% market share since their introduction in 2019 (compared to four years for Wi-Fi 5). … END_OF_DOCUMENT_TOKEN_TO_BE_REPLACED