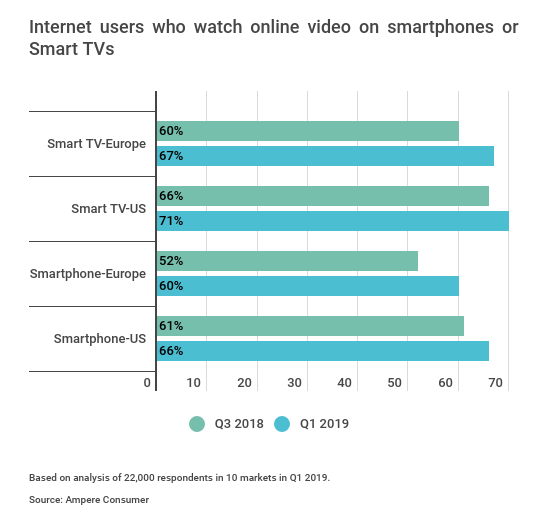 European and US internet audiences are increasingly watching online video on smartphones and Smart TVs, according to Ampere Analysis.

Growth is strongest in Europe, with a seven percentage point increase in the proportion watching on Smart TVs, and an eight point increase for smartphones.

However, the US still has a higher proportion overall watching online videos on these devices, and particularly those who watch them daily:
– Smart TV: US 44% watch daily vs 30% in Europe
– Smartphones: US 33% watch daily vs Europe 23% 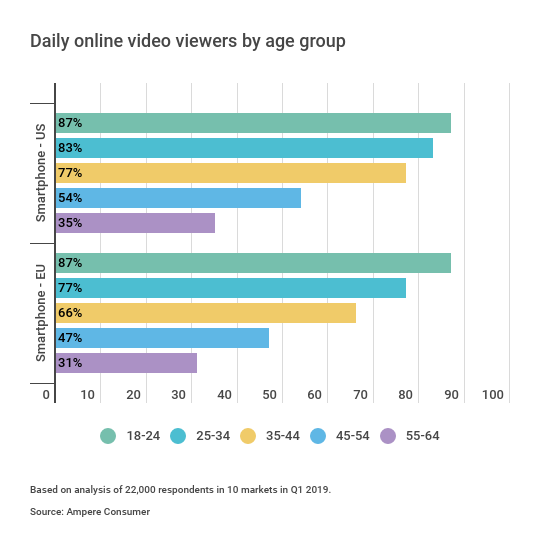 18-24 year olds more likely to watch online videos daily on their smartphones than other age groups.

In both the US and Europe almost nine in ten 18-24 year olds watch online video on their smartphone daily.

Across all other age groups, those in the US are more likely to be daily viewers on smartphones than their European counterparts.

Minal Modha, Consumer Research Lead at Ampere Analysis says “It is interesting to see young people in Europe and the US mirror levels of daily smartphone viewing, while in comparison older Europeans lag behind their US counterparts in this area. As the younger group ages, we expect them to continue watching video content on smartphone, so this viewing behaviour will continue to grow overall.” 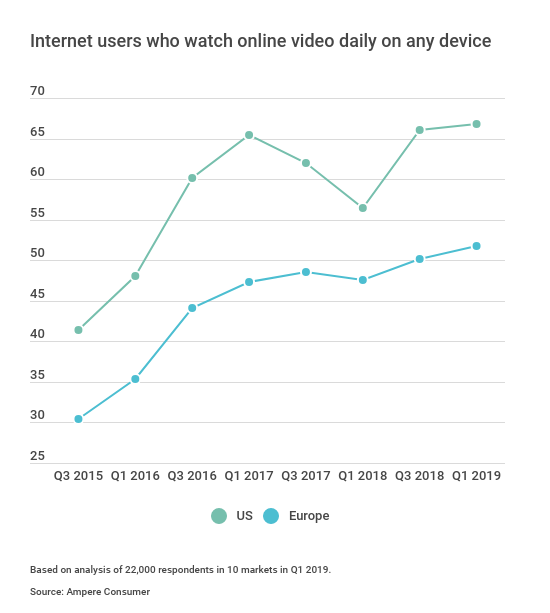 Daily online video watching on any device continues to grow.

Just over two thirds (67%) of internet users in the US watch online video daily on at least one device. The proportion in Europe is lower, at 52%.

The gap between the proportion of daily online video watchers in the US and Europe has once more increased, after narrowing in 2017 and early 2018. 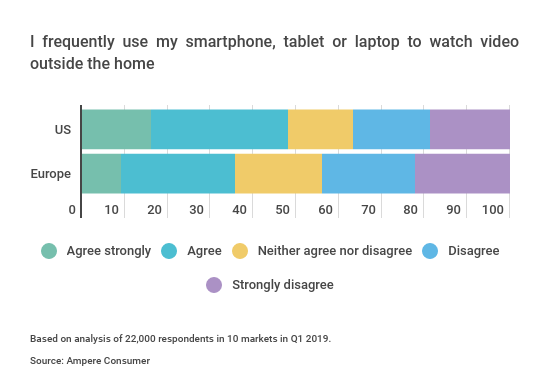 Out-of-home watching is more common in the US.

The proportion of internet users who strongly agree they frequently use a smartphone, tablet or laptop to watch video outside home is 16% in the US and 9% in Europe. Overall 48% in the US agree they do this regularly, compared to 36% in Europe.

Wi-Fi 6 and Wi-Fi 6E client devices are entering the home in an unprecedented way, surpassing 50% market share since their introduction in 2019 (compared to four years for Wi-Fi 5). … END_OF_DOCUMENT_TOKEN_TO_BE_REPLACED