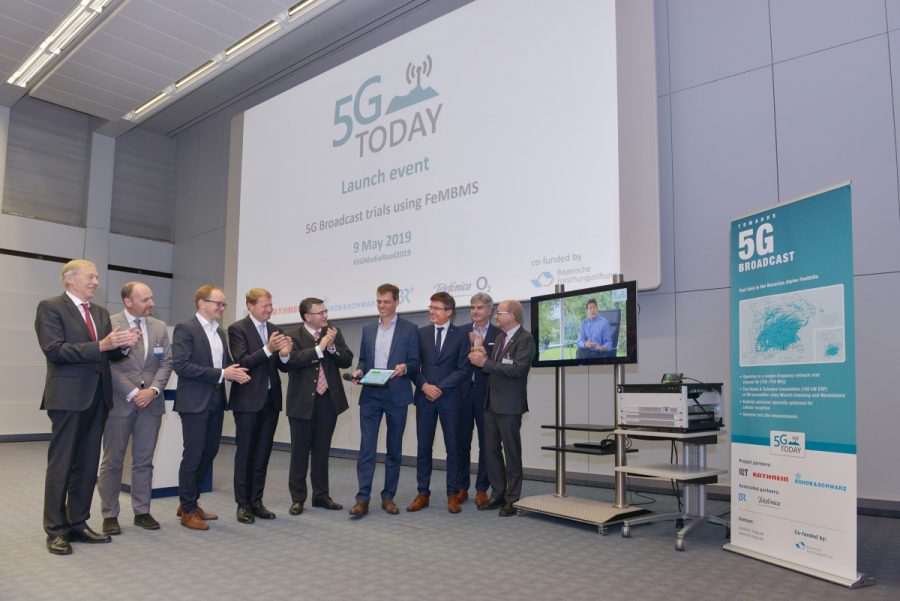 The project partners Bavarian public broadcaster BR, IRT, Kathrein, Rohde & Schwarz and Telefónica Deutschland are jointly testing broadcasting options for 5G technology. The new large-area 5G field trial in the Bavarian alpine region is covered by two high-performance transmitters at BR transmitter sites in Ismaning near Munich and on the top of the Wendelstein mountain. Both operate with 100 kilowatts ERP.

With the help of the high power of the transmitters and the high transmission towers (HPHT), the broadcasting of TV channels covering large areas can be tested based on the new broadcast mode FeMBMS (Further evolved Multimedia Broadcast Multicast Service). FeMBMS allows far-reaching distribution of content across large coverage areas with a radius of up to 60 kilometres.

The 5G Today project is intended to lay the foundation for the efficient transmission of broadcast content in 5G networks. It has been supported by the Bavarian Research Foundation since 2017.

“I am delighted that today we can launch the world’s first large-scale test network for 5G broadcasting,” said Ulrich Wilhelm, director general of BR and currently chairman of German public broadcaster association ARD. “We must design our future digital communications infrastructures in such a way that everyone can continue to benefit from the diversity of media content.”

What has been lacking so far in the distribution of broadcast content is an efficient and direct way of reaching users with live and linear content on mobile devices without additional costs for users. That is why BR together with IRT and three industry companies launched the 5G Today project in 2017. The project will test how 5G broadcasting can be used to create an overlay infrastructure that can simultaneously serve millions of future 5G mobile reception devices. The aim is neither to occupy the regular mobile networks nor to incur additional costs for citizens.

The two test transmitters are operated as a single frequency network (SFN) on channel 56/57 (750-760 MHz). Kathrein provides the antenna system while HPHT transmitters from Rohde & Schwarz are used for the 5G transmission. Telefónica Deutschland is contributing the frequencies.

“With this field trial covering Munich and the Bavarian alpine region, we now have a unique and true pioneer project – even if it will still take a few more years for commercial reception devices to become available and before public operation will be possible,” said IRT’s managing director Michael Hagemeyer. “The test will provide important insights for our research.”

IRT is coordinating the project and is developing a prototype FeMBMS receiver based on a software-defined radio (SDR) solution. In future, this technology could be integrated into smartphones, tablets and TV sets for the reception of live and linear content over 5G. The test receiver for the kick-off event is provided by the Institute for Communications Technology of Technische Universität Braunschweig.

The test operation of 5G Today will run until autumn 2019, after which the results and further exploitation of the findings will be evaluated. The project ends on October 31, 2019.

Wi-Fi 6 and Wi-Fi 6E client devices are entering the home in an unprecedented way, surpassing 50% market share since their introduction in 2019 (compared to four years for Wi-Fi 5). … END_OF_DOCUMENT_TOKEN_TO_BE_REPLACED