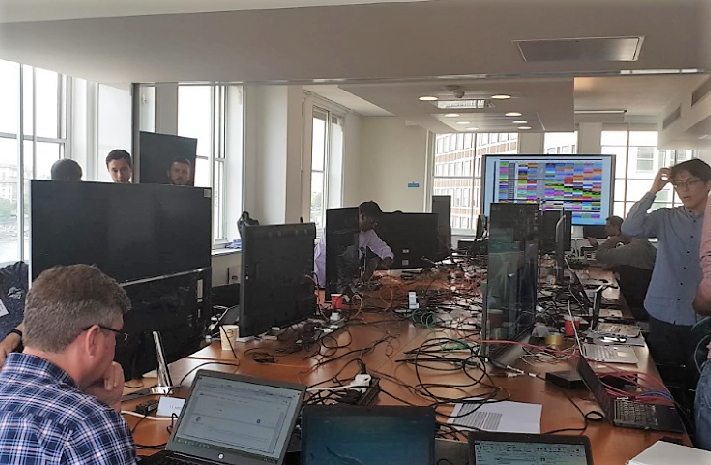 Full house at the eighth joint Ultra HD Plugfest of industry associations DTG Testing UK and Deutsche TV-Plattform at the end of June 2018.

28 companies sent more than 50 engineers and developers to London to test TV sets, set-top-boxes, AV receivers and other devices. The Plugfest was linked to the Big Interop Event of the Ultra HD Forum which focuses on the end-to-end chain. Of particular interest was the UHD/HDR production of the 2018 FIFA World Cup in Russia.

“Overall, it has been shown that we have ‘classic’ interoperability with regard to HDMI interfaces etc. under control,” said Stephan Heimbecher (Sky Deutschland) who heads the Ultra HD working group at Deutsche TV-Plattform and is a member of the executive board.

“However, we will probably hold the next scheduled Ultra HD Plugfest in Berlin in December anyway, because there is always something new on topics such as High Dynamic Range (HDR), High Frame Rate (HFR) and Next Generation Audio (NGA) going beyond simple interoperability.”

Wi-Fi 6 and Wi-Fi 6E client devices are entering the home in an unprecedented way, surpassing 50% market share since their introduction in 2019 (compared to four years for Wi-Fi 5). … END_OF_DOCUMENT_TOKEN_TO_BE_REPLACED