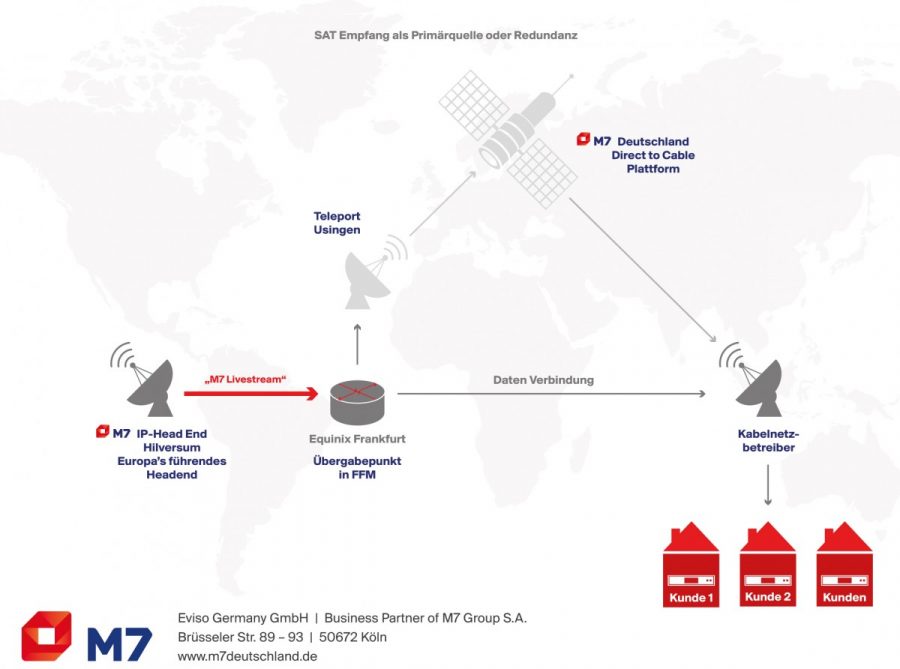 M7 Group has created a central head-end in Hilversum for the delivery of linear TV channels as IP streams through fibre-optic networks to network operators.

“The move is part of our aim to make everything as easy as possible for our network partners,” Christian Heinkele, managing director of Eviso Germany, business partner of M7 Group, told Broadband TV News. He added that the streaming service will enable direct redistribution of the signals to end-consumers, either in IPTV or DVB-C mode.

The decision to build the M7 Livestream hub, which will be launched at this year’s ANGA COM trade show in Cologne, was based on demand by M7 partners, in particular municipal utility providers and city carriers with an all-IP infrastructure and a single, central head-end, explained Heinkele. M7 has won seven new customers in Germany in the past months, most of them from this business segment.

M7 Livestream will be rolled out in German-speaking Europe and initially mirror the channels available on M7’s transponders on Eutelsat 9B (9° East), but it can be expanded any time by adding more free-to-air or pay-TV channels, both from Germany and other countries, based on the requirements of its network partners, said Heinkele. “Everything is possible.”

The hub will eventually be able to provide of the complete range of channels offered on a typical cable network or IPTV platform ranging from public and commercial free-to-air channels to pay-TV and international channels. Several network operators have already indicated their interest in such an all-inclusive service provided by M7, said Heinkele.

He explained that this scalability was one of the advantages of the streaming hub. Channels can be added as required by platform partners, even ones not available on satellite, including Ultra HD channels. The majority of channels is delivered to the Hilversum hub through fibre-optic networks as IP streams anyway. If network operators want to expand their channel line-up, they don’t have to invest in upgrading their head-ends as everything comes from one source, bundled from different streaming sources and satellite positions, said Heinkele.

M7 has invested significant amount into the streaming hub which has been built up in the past one and a half years, said Heinkele. The facility is equipped with the latest generation video delivery technology from Harmonic, turning into one of Europe’s most modern head-ends, according to Heinkele. The IP streams are delivered from Hilversum to the Equinix data centre in Frankfurt from where the platform partners can access them through fibre-optic networks.

Heinkele stressed that M7 Livestream was not primarily set up to replace satellite delivery as there was still strong demand for this type of channel supply from classic cable operators, especially if they have several local head-ends spread across their footprint. It can, however, provide redundancy for satellite reception and vice versa. There is also the option of combining satellite and IP delivery at the network operator’s head-end, for example to provide additional channels or Ultra HD services not available on satellite.

The hub in Hilversum can also be used by non-M7 clients to operate their own streaming services, said Heinkele, adding that several third-party companies have already indicated their interest.

Wi-Fi 6 and Wi-Fi 6E client devices are entering the home in an unprecedented way, surpassing 50% market share since their introduction in 2019 (compared to four years for Wi-Fi 5). … END_OF_DOCUMENT_TOKEN_TO_BE_REPLACED