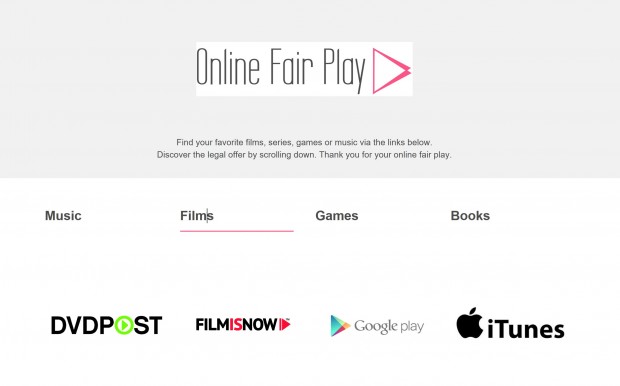 Since a few days, people who are now trying to access these sites will see an ‘online fair play’ message from the Belgian Entertainment Association (BEA) – (pictured above)

After a year-long legal dispute, the film and music industry and the main internet service providers have decided, on the basis of a joint request, to go to court, according to L’Echo. This case was held in March.

Benoît Michaux, the lawyer of the BEA, which represents the interests of the film and music industry, summarised the positions of both parties during a pleading before the Brussels French Commercial Court.

“The European legislator has set up a mechanism that allows the national judge to demand injunctions to order suppliers to block access to the litigious websites,” according to Michaux.

The BEA and Internet service providers have agreed on a list of 33 websites and 450 domain names that they believe are guilty of facilitating illegal downloads.

This common approach to combating virtual piracy and illegal downloads is a first, a feeling summarised by BEA’s lawyer. “This joint request is a little unusual, things are changing. There is a certain maturation of minds, we realise, from all sides, that we must take the problem of counterfeiting head-on through blocking measures. There is a common vision on what measures to take and how to identify counterfeiting.”

“The responsible actors want to demonstrate that it is possible to stop piracy via procedural law”, pleaded Benoît Van Asbroeck, Proximus’ and Telenet’s counsel.

By mutual agreement, the access providers and the BEA therefore decided to submit a common list to the judge and to comply with the latter’s judgment. Bertrand Vandevelde, VOO’s counsel, also referred to the courts. This solution, as has been said, should make it possible to avoid a lengthy procedure in a constantly evolving area. Moreover, the parties informed the judge that they reserved the right to represent themselves before him over time in order to update the list in question.

Wi-Fi 6 and Wi-Fi 6E client devices are entering the home in an unprecedented way, surpassing 50% market share since their introduction in 2019 (compared to four years for Wi-Fi 5). … END_OF_DOCUMENT_TOKEN_TO_BE_REPLACED