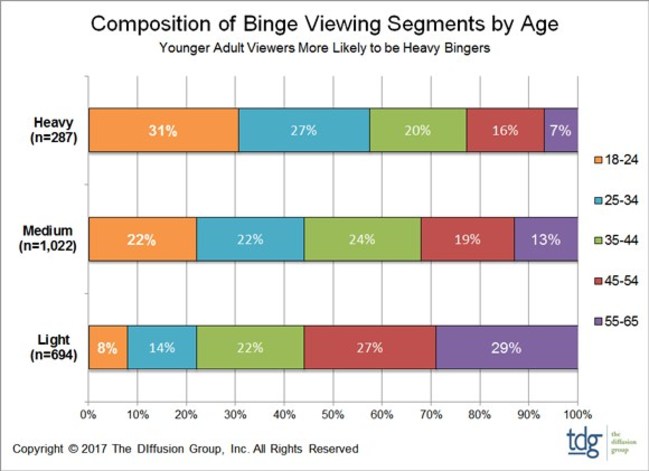 In the US, 86% of adult broadband users binge view at least occasionally, with 58% of 18-34s binging daily, according to The Diffusion Group (TDG).

Importantly, TDG analysts found that the frequency of binging is strongly correlated with the viewer’s age. For example, 58 percent of Heavy Bingers are between the ages of 18 and 34, while 56% of Light/Non-Bingers are age 45 and older.

“The fact that 31 percent of Heavy Bingers are between the ages of 18 and 34 further illustrates just how different millennial viewing habits are from those of older generations,” notes Michael Greeson, ptesident and principal analyst at TDG.

“For more than a decade, TDG has predicted and observed a structural transformation in what it means to ‘watch TV,’ with viewing behavior slowly changing from an activity defined by flipping between different live shows on different networks, to one characterized by on-demand binging of individual series.”

As these consumers age and younger generations steeped in quantum habits follow behind them, Greeson argues that this behavior will only become more prominent, further impacting programming and distribution strategies.

Wi-Fi 6 and Wi-Fi 6E client devices are entering the home in an unprecedented way, surpassing 50% market share since their introduction in 2019 (compared to four years for Wi-Fi 5). … END_OF_DOCUMENT_TOKEN_TO_BE_REPLACED