This according to new research from The Diffusion Group (TDG). 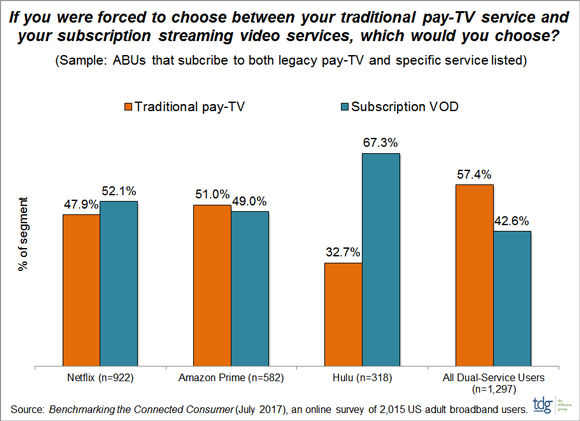 “One would be forgiven for thinking that Netflix dual-service users would be the segment most likely to stick with their streaming services. Given the reach of the service (nearly 100 million viewers versus Hulu’s 47 million) and the relative strength of the Netflix brand, it is not unreasonable to assume that the bond between Netflix and its subscribers would lead to higher numbers.”

But according to TDG’s new research, Hulu proved far stickier than legacy-TV when compared to both Netflix and Amazon Prime.

Given this level of brand loyalty, Hulu could have a leg up when it comes to converting its SVOD users to Hulu Live TV subscribers. Then again, much depends on whether this phenomenon is due to a preference for watching TV shows on-demand versus live, or due to a branded quality of experience above and beyond on-demand functionality. If more the former, converting SVOD users to live TV subscribers will prove difficult for Hulu. If more the latter, the chances of conversion are much higher — especially if Hulu can execute a level of integration between live and on-demand that exceeds both incumbent and virtual MVPDs.

Wi-Fi 6 and Wi-Fi 6E client devices are entering the home in an unprecedented way, surpassing 50% market share since their introduction in 2019 (compared to four years for Wi-Fi 5). … END_OF_DOCUMENT_TOKEN_TO_BE_REPLACED