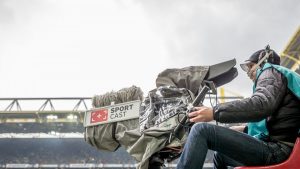 German telco Deutsche Telekom will commence its live coverage of third-division Bundesliga football games at this year’s season kick-off in mid-July – one year earlier than planned.

All 380 matches will be shown on Telekom’s IPTV platform Entertain TV, on the internet and mobile TV in Germany. This agreement was made with SportA, the sports rights agency of German public broadcasters ARD and ZDF.

ARD’s regional affiliates will produce up to 120 games of their choice and show them free-to-air mainly on Saturdays on their regional TV channels. ARD will also continue to report about selected matches in its Bundesliga programme Sportschau 3. Liga on Saturdays at 18.00 CET on its main channel Das Erste.

The remaining 260 games will be produced by Telekom – in Full HD quality.

In January 2017, the telco acquired the exclusive pay-TV rights for all third-division Bundesliga games from the 2018/19 season from Germany’s national football association DFB. The new agreement with current TV rights holder Sport1 enables Telekom to commence its live coverage one year earlier.

Wi-Fi 6 and Wi-Fi 6E client devices are entering the home in an unprecedented way, surpassing 50% market share since their introduction in 2019 (compared to four years for Wi-Fi 5). … END_OF_DOCUMENT_TOKEN_TO_BE_REPLACED