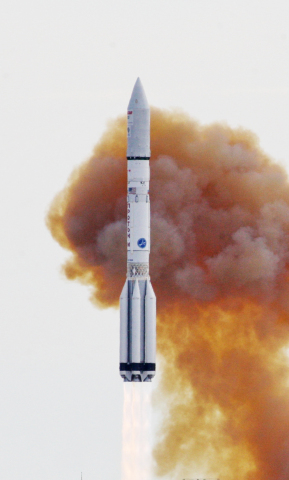 The ILS Proton launched from Pad 24 within the Baikonur Cosmodrome at 9:45 AM local time on June 8, with the EchoStar XXI satellite on board. The first three stages of the Proton Breeze M utilized a standard ascent profile to place the orbital unit (Breeze M upper stage and the EchoStar XXI satellite) into a suborbital trajectory. Then, the Breeze M performed planned mission maneuvers to advance the orbital unit first to a nearly circular parking orbit, then to an intermediate orbit, followed by a transfer orbit, then finally to a geosynchronous transfer orbit. Separation of the EchoStar XXI satellite occurred at approximately 9 hours and 13 minutes after lift-off.

This was the 413th launch for Proton since the inaugural flight in July 1965, and the 94th ILS Proton launch executed. The Proton Breeze M launch vehicle was developed and built by Khrunichev Space Center of Moscow, one of the pillars of the Russian Space industry and majority shareholder in ILS. EchoStar XXI, weighing nearly 9 metric tons, is the heaviest satellite launched by ILS Proton to date.

EchoStar XXI was manufactured by SSL utilising their space-proven 1300 platform. EchoStar XXI is a state-of-the-art S-band satellite designed to provide mobile connectivity throughout Europe to be located at the 10.25° East orbital slot. EchoStar subsidiary EchoStar Mobile Limited, an EU-wide licensee for an integrated mobile satellite service network with a complementary ground component, will utilize a portion of the capacity on EchoStar XXI to provision its next-generation, all IP-enabled mobile communications network. This 29th SSL satellite launched on Proton also features a large unfurlable reflector to provide the high performance levels required for mobile services.

Wi-Fi 6 and Wi-Fi 6E client devices are entering the home in an unprecedented way, surpassing 50% market share since their introduction in 2019 (compared to four years for Wi-Fi 5). … END_OF_DOCUMENT_TOKEN_TO_BE_REPLACED