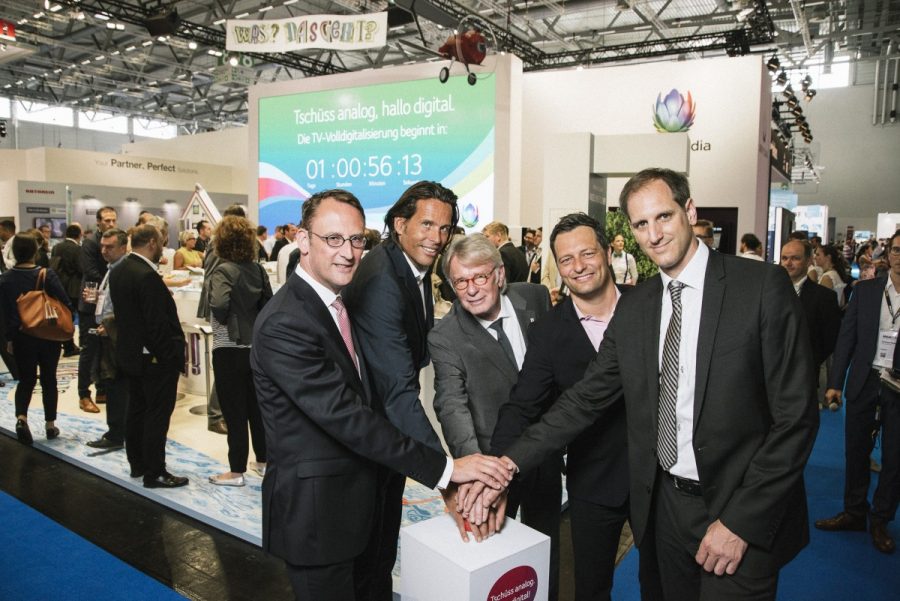 95 to 96% of Unitymedia’s cable households will have made the move to digital television when analogue switch-off will commence on June 1, 2017 in the southern part of federal state Baden-Württemberg, said Christian Hindennach, Senior Vice President Consumer at Unitymedia. The task would now be “to take the remaining around 300,000 analogue TV households with us.”

Unitymedia will gradually phase out analogue television in its coverage area in Baden-Württemberg, Hessen and North-Rhine Westphalia in five regional steps. The move will be completed at end of June 2017. The red button inaugurating analogue switch-off was pressed by Schüler and Hindennach together with the directors of the media authorities of the three involved federal states at Unitymedia’s booth at ANGA COM 2017 (see image).

“The digital age of television has finally arrived for Unitymedia customers. As the first cable operator in Germany, we will say goodbye to the outdated analogue technology, thereby consequently continuing our long-term digitisation strategy in the interest of our customers,” said Schüler. “Our customers will continue to benefit from new digital entertainment offers in future.”

Wi-Fi 6 and Wi-Fi 6E client devices are entering the home in an unprecedented way, surpassing 50% market share since their introduction in 2019 (compared to four years for Wi-Fi 5). … END_OF_DOCUMENT_TOKEN_TO_BE_REPLACED