Nearly one-third of OTT free trials convert to a paid subscription, according to new connected entertainment research from Parks Associates.

“Free OTT trials are effective in converting a sizeable portion of trial users into subscribers,” said senior analyst Glenn Hower. “There is a potential for free trial abuse, but only roughly 1% of consumers are ‘serial trialers’ who abuse free trials to avoid paying for services. Most consumers use trials for their intended purpose of trying out a service before deciding whether or not to continue as a paid subscriber.”

More than one-fourth of US broadband households trialed at least one OTT service in the previous six months. Of these users, 47% subscribed to at least one trial service after the free period expired. 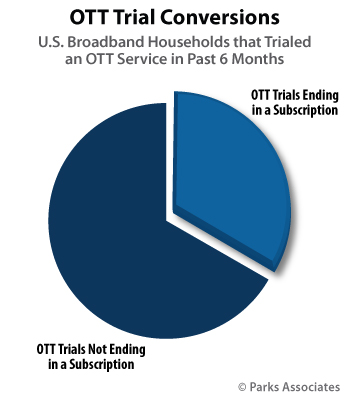 “While spending on transactional services has declined, average monthly spending on subscription OTT video has increased, reaching $7.95 per US broadband household in 2016. Most households build their services around at least one of the top three services, Netflix, Amazon, and Hulu, which also show among the most effective trial conversion rates,” Hower said.

“ince there isn’t much money left for niche OTT services, these services should not expect to expand beyond their particular audience niche and may also have to implement tiered services or hybrid business models to diversify their subscriber bases and generate incremental revenue wherever possible.”

Wi-Fi 6 and Wi-Fi 6E client devices are entering the home in an unprecedented way, surpassing 50% market share since their introduction in 2019 (compared to four years for Wi-Fi 5). … END_OF_DOCUMENT_TOKEN_TO_BE_REPLACED