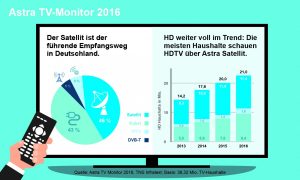 The Astra TV-Monitor is compiled yearly by market research institute TNS Infratest on behalf of Astra satellite operator SES. A total of 6,000 households throughout Germany were interviewed at the end of 2016 for the current edition. The results reflect each household’s main TV reception method, usually the TV set in the living room.

Wi-Fi 6 and Wi-Fi 6E client devices are entering the home in an unprecedented way, surpassing 50% market share since their introduction in 2019 (compared to four years for Wi-Fi 5). … END_OF_DOCUMENT_TOKEN_TO_BE_REPLACED