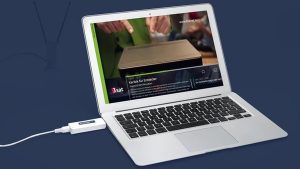 German transmitter network operator Media Broadcast will make the USB TV stick for reception of the next-generation DVB-T2/HEVC-based DTT platform including the encrypted Freenet TV service available from retailers and www.freenet.tv from March 23, 2017.

This was announced by Klaus Steffens, director of Freenet TV technology at Media Broadcast, during a press conference. The German DVB-T2 platform will launch with around 40 public and commercial TV channels on March 29, 2017.

Compared with cable, satellite and IPTV, mobile and portable reception, for example on the balcony, on a campsite or in the car, is one of the key benefits of terrestrial broadcast technology, in Steffens’ view. No data volume is used up as no mobile network is being used. The USB TV stick will be available for PCs, laptops and Mac computers at a recommended consumer retail price of €59.99. 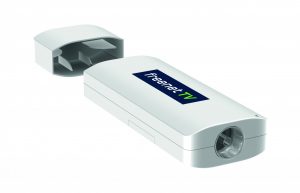 The USB 2.0-based dongle will bring the DVB-T2 TV channels, an electronic programme guide (EPG), teletext and subtitles to the screen. In mid-2017, OTT channels using IP streaming will be added. Further new features to be included at a later stage are time-shifted television and a TV recording function, according to Steffens.

The stick will not be paired with the hardware, hence it can be used with different computers and laptops. Freenet TV can’t yet be received on smartphones and tablets, but solutions for mobile devices are being looked into. 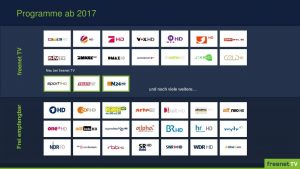 Kerstin Köder, Head of Freenet TV at Media Broadcast, announced two further channels launching on the Freenet TV platform: German entertainment channel Tele 5 and news channel N24. In total, 17 of the 20 commercial channels to be aboard are now known. This includes the free-to-air channels of the two large TV groups RTL and ProSiebenSat.1 as well as Sport1, DMAX and Eurosport 1. All channels will be offered in Full HD resolution and thereby in higher quality than on cable, satellite and IPTV. The DVB-T2 line-up will also include Bibel TV and QVC offered unencrypted and around 20 also unencrypted channels from the public broadcasters in Full HD format.

Reception of Freenet TV on the TV set will cost €69 per year with the first three months offered at no charge. The fee applies to each reception device. Collective family or household subscriptions won’t be offered at launch, said Köder, but such options are being evaluated.

Internet-based add-on service Freenet TV Connect will launch alongside Freenet TV on March 29, 2017; its predecessor Multithek will be closed in return. The OTT service will bring further TV channels onto the TV screens of DVB-T2 households integrated into the channel listing together with the terrestrial channels. The line-up will comprise, for example, Spiegel TV, Euronews, Bloomberg TV, CNN, France 24, NHK World, eoTV, rheinmaintv, QVC plus and 1-2-3.tv. A Freenet TV subscription will not be required to receive the IP streaming channels.

Freenet TV Connect will include a personalised start screen on which viewers can place their favourite content for quick accessibility. The integrated EPG will provide programme details and the possibility to directly tune into the TV channels. Through a collaboration with Radioplayer.de, Freenet TV Connect will also offer more than 600 radio stations. The portfolio will also feature catch-up services and apps.

For usage, viewers need a HbbTV 1.5-compliant smart TV set with integrated DVB-T2/Freenet TV reception or a Freenet TV set-top-box carrying the Freenet TV Connect logo. The internet connection should have a minimum bandwidth of 3Mbps.

Freenet TV Connect will in future also be able to host subscription services such as pay-TV or video-on-demand with the technical preparations being underway, said Steffens, adding that the hybrid streaming service will also provide the pathway for Ultra HD/4K content to reach DVB-T2 households in future. 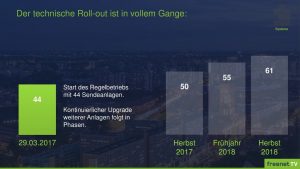 DVB-T2 will be rolled out in the night from 28 to 29 March 2017 across a total of 70 transmitter sites, 44 of them also offering Freenet TV, explained Steffens. In this so-called Magic Night more than 200 technicians from Media Broadcast will be on site at the locations. The deployment will continue: By 2018, Freenet TV is scheduled to be available on 61 transmitter sites, reaching 80% of the German population.

Media Broadcast will accompany the DVB-T2 rollout throughout the night in a blog, reporting live which transmitters sites are currently being converted. Viewers are recommended to conduct a channel search on their DVB-T2 reception device the next day to access the new channels.

Wi-Fi 6 and Wi-Fi 6E client devices are entering the home in an unprecedented way, surpassing 50% market share since their introduction in 2019 (compared to four years for Wi-Fi 5). … END_OF_DOCUMENT_TOKEN_TO_BE_REPLACED