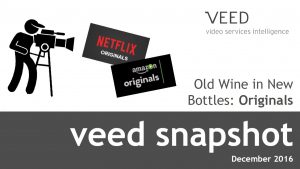 Netflix provides its subscribers with more originals than its competitor Amazon, but the latter is heating up competition with high investments in its own productions.

In its latest Spotlight, German research company Veed Analytics examines the original productions offered by Netflix and Amazon in the subscription video-on-demand (VOD) market in Germany, the UK and US.

The analysis focuses on true originals – series, movies or specials solely commissioned or produced by Amazon or Netflix – and other kinds of originals, for example partnerships with broadcasters, continuations of series or the acquisition of exclusive streaming rights.

Due to a smaller overall portfolio, the share of Netflix originals is significantly higher in Germany than in the US and UK. Regarding popularity, Netflix clearly beats Amazon with 14 of their originals having more than 1 million followers on Facebook, while Amazon has only one (The Grand Tour, 1.29 million).

The analysis also takes a look at possible reactions by other tech companies such as Apple or Google, non-global VOD providers like Sky or maxdome and production studios while also assessing the next strategic movies Netflix and Amazon could make.

Wi-Fi 6 and Wi-Fi 6E client devices are entering the home in an unprecedented way, surpassing 50% market share since their introduction in 2019 (compared to four years for Wi-Fi 5). … END_OF_DOCUMENT_TOKEN_TO_BE_REPLACED