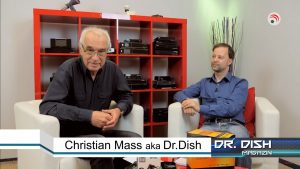 DrDish Television earlier filed for insolvency at the district court in Munich. On January 2, 2017, the court placed the company’s assets under preliminary receivership and appointed Munich-based lawyer Dr Matthias Hofmann as the preliminary insolvency administrator.

Two potential investors have already contacted the insolvency administrator, said Mass. There are also parties interested in co-operations, for example in the areas of production and studios, he added. “The strong support we receive from all sides is worth a lot to us.”

The insolvency was caused by an investor backing out on short notice for personal reasons on December 15, 2016, said Mass. “We didn’t have a choice and had to pull the emergency break.”

The live-stream of TecTime TV (formerly called Dr.Dish TV) on the channel’s website continues, but the satellite distribution on Astra (19.2° East) has been terminated for now.

“The collaboration with the insolvency administrator work well,” said Mass. Depending on the course of the discussions with the interested parties, it would take around three months “to reach the point again where we were.”

The employees are currently laid off. The target would be to keep the core workforce in the editorial and film cutting areas, but convert some of the jobs from permanent positions to freelance work, said Mass.

Wi-Fi 6 and Wi-Fi 6E client devices are entering the home in an unprecedented way, surpassing 50% market share since their introduction in 2019 (compared to four years for Wi-Fi 5). … END_OF_DOCUMENT_TOKEN_TO_BE_REPLACED