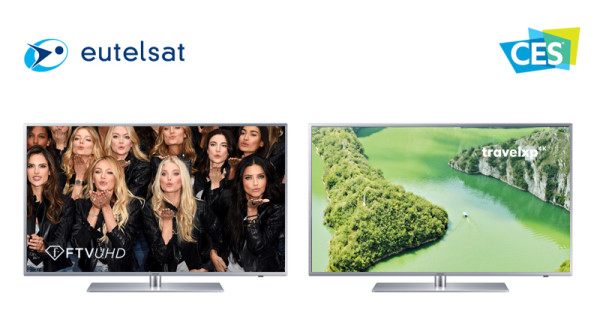 CES 2017. At this year’s CES Eutelsat Communications has announced the launch of two new Ultra HD channels at its Hotbird video neighbourhood.

FTV UHD made its debut on Hotbird on December 23, while Travelxp 4K starts broadcasting from January, 2017. Both channels have selected HEVC encoding with 10bits of colour depth (one billion colours), at 50 frames per second.

“Since the launch of our first fashion-themed channel on a Eutelsat satellite in 1997 we have developed a unique and comprehensive brand with high-quality broadcasting at its core,” commented FTV UHD’s CEO, Michel Adam Lisowski.

“We made the leap to High Definition ten years after the launch of our first digital channel on Eutelsat’s fleet. Today, we are excited to pursue our commitment to the highest quality of broadcasting standards through an Ultra HD channel offering Eutelsat’s HOTBIRD homes exceptional images of the latest fashion events from around the world. Eutelsat is our fashionable and lucky Hotbird.”

Available in seven languages, Travelxp 4K, features hundreds of hours of world class travel programmes filmed all over the world. The 4K channel follows the success of Travelxp HD, which offers 100% originally-produced premium travel and lifestyle programming distributed to over 50 million homes globally.

Travelxp 4K’ CEO, Prashant Chothani, commented: “Travelxp 4K is all about bringing the world to homes in stunning resolution. 10 bit REC 2020 with HLG, HDR will make the viewing experience more immersive and vivid. It’s not just about more pixels in 4K but better pixels.We are proud to reinforce our partnership with Eutelsat and to benefit from their vast knowledge of the Ultra HD broadcasting chain. Joining the HOTBIRD neighbourhood and gaining access to a unique and ethnically diverse population pool is a natural step for us that will fast-track penetration of Travelxp 4K into homes across Europe, North Africa and the Middle East.”

Michel Azibert, Eutelsat’s Chief Commercial and Development Officer, concluded: “The launch of FTV UHD and Travelxp 4K is new evidence of the move by content producers to Ultra HD. Their trust in Eutelsat reflects our commitment to delivering service that guarantees viewers an enriched and unrivalled Ultra HD experience. We are proud to support these new channels and look forward to accelerating their distribution across the vast footprint provided by our HOTBIRD video neighbourhood.”

Wi-Fi 6 and Wi-Fi 6E client devices are entering the home in an unprecedented way, surpassing 50% market share since their introduction in 2019 (compared to four years for Wi-Fi 5). … END_OF_DOCUMENT_TOKEN_TO_BE_REPLACED