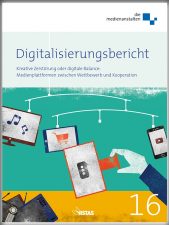 The number of households in Germany receiving digital TV services has risen to 35 million, or 92.3% of the total.

On cable networks, the last remaining analogue TV distribution infrastructure, the amount of digital TV households increased from 72.5% to 82.1% in the past 12 months, according to the German media authorities’ digitalisation report 2016.

Just 2.9 million cable households solely watch analogue TV. One year ago, the figure amounted to 4.5 million. The development increases the chances for the nationwide analogue-switch off on cable envisaged for 2018 to become reality.

As the first German cable operator, Unitymedia will terminate analogue TV carriage on its network on June 30, 2017.

The popularity of the TV reception methods remain largely unchanged: DTH satellite and cable lead with 46.5% and 45.9% of TV households respectively, followed by DTT (9%) and IPTV (6.2%).

This is a result of the broadcasters’ different HD strategies: The public channels are available unencrypted and at no charge while the commercial broadcasters charge viewers a fee for the reception of the HD versions of their ad-supported free-to-air channels via cable, satellite, IPTV and – from 2017 – DVB-T2.

The digitalisation report 2016 can be downloaded free of charge from the media authorities’ website in German and English.

Wi-Fi 6 and Wi-Fi 6E client devices are entering the home in an unprecedented way, surpassing 50% market share since their introduction in 2019 (compared to four years for Wi-Fi 5). … END_OF_DOCUMENT_TOKEN_TO_BE_REPLACED