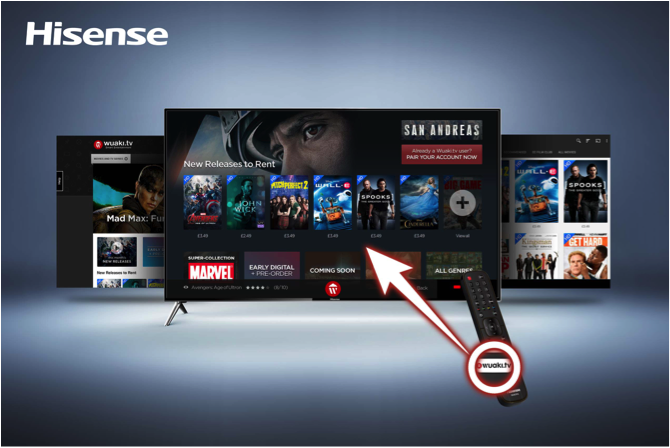 A dedicated Wuaki.tv button will be placed on the Hisense remote controls for its 2016 newly designed smart TV models.

At the same time, all Hisense 2016 smart TV models will give direct access to premium new release and UHD contents from Wuaki.tv to their users. Interestingly Wuaki.tv is now the only European VOD player to have a button on a smart TV remote control. Until now, only Netflix and YouTube are featured on some remotes.

The devices being sold in UK, Germany, Spain, Italy, France, Ireland and Austria will already have this button incorporated in the remote control by May 2016. This agreement will be extended to the rest of the countries where Wuaki.tv plan to operate along this year including The Netherlands, Belgium, Portugal and Switzerland, among others.

Thanks to this feature, user will have instant access to Wuaki.tv app with one click on Wuaki button on remote control.

Hanson Han, Deputy GM of Hisense international and GM for Hisense Europe, added “This partnership is a new step to position Hisense ahead competition in European countries. It will allow us to provide a multitude of 4K contents to Hisense UHD TV owners and bring our smart TV in a new era.”

Wi-Fi 6 and Wi-Fi 6E client devices are entering the home in an unprecedented way, surpassing 50% market share since their introduction in 2019 (compared to four years for Wi-Fi 5). … END_OF_DOCUMENT_TOKEN_TO_BE_REPLACED