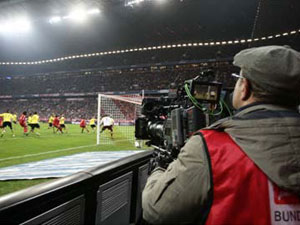 A TV broadcaster will in future not be able to acquire all domestic pay-TV rights for the live games of Germany’s national football league Bundesliga across all distribution platforms.

The Federal Cartel Office, Bundeskartellamt, has approved a new sales model by national football association DFL for the Bundesliga rights from the 2017/18 season containing a no-single-buyer rule for the first time: A pay-TV operator – as currently the case with Sky Deutschland – will no longer be able to become the sole rights holder of all Bundesliga live games on cable, satellite, IPTV and OTT.

“We have focused on rulings which ensure that more than one single contender will acquire the live rights in the end,” Andreas Mundt, president of the Cartel Office, said in Bonn. “With only one live rights holder in the market, there is the danger that competition for innovation – in particular from internet-based offers – is limited.”

“As the experiences from other countries, for example the UK, show, such as model does not lead to consumers requiring more than one subscription to watch all games in most cases. Rights holders can, for example, grant sub-licences to each other,” explained Mundt. “There will probably also be offers covering only a part of the live games.”

For comparable considerations, the regulation authorities and legislative bodies have already imposed no-single-buyer rules for important European leagues such as the UK’s Premier League or the Italian Lega Calcio, stresses the Cartel Office.

According to the competition authority, it would be sufficient if – depending on whether all transmission platforms or just internet and mobile are covered – between 30 and 102 attractive Bundesliga games (of a total of 306 matches) per season along with extensive highlight coverage were acquired by an alternative contender.

If a bidder in the tender, for example Sky Deutschland, secures all rights for conventional distribution platforms, up to 102 live games will be extracted into a separate OTT package for an alternative operator. Sky would then not be able to show these games on its OTT service Sky Go. As the Cartel Office has allowed sub-licencing, Sky Go customers could, however, still end up being able to watch the games if the alternative operator and Sky reach a collaboration agreement.

The green light by the Cartel Office opens the door for DFL to kick off the tender for the national Bundesliga rights announced in March 2016. At the last tender in 2012, Sky Deutschland gained all pay-TV rights, ousting Deutsche Telekom which subsequently closed down its Bundesliga IPTV offer LIGA total! .

It is expected in the industry that – besides Sky and Telekom – Eurosport (Discovery) and UK-based Perform Group will submit bids for the pay-TV rights. Amazon and Google subsidiary YouTube are also said to be interested. Perform Group which recently snapped away the Premier League rights from Sky Deutschland wants to launch an OTT live sports platform in Germany and other markets this year. No doubt: The Bundesliga rights would be a perfect flagship.

Wi-Fi 6 and Wi-Fi 6E client devices are entering the home in an unprecedented way, surpassing 50% market share since their introduction in 2019 (compared to four years for Wi-Fi 5). … END_OF_DOCUMENT_TOKEN_TO_BE_REPLACED