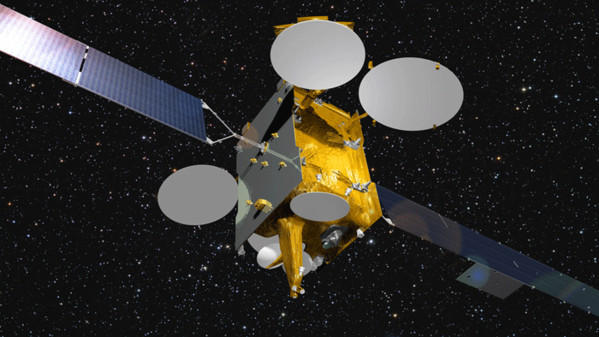 The Eutelsat 9B satellite has been fully powered up and is now providing TV services to homes across Europe.

The satellite has replaced Eutelsat 9A to broadcast a diverse line-up of over 350 channels, of which 100 in HD, to cable, DTH and DTT homes. It serves a portfolio of clients that include M7 for the KabelKiosk platform as well as OTE’s DTH platform, AFN, Arqiva, Globecast and Media Broadcast.

Eutelsat 9B is a Ku-band satellite for the 9 degrees East position. With its entry into service overall Eutelsat capacity at this position has increased to 50 physical transponders (47 equivalent 36Mz transponders). The satellite addresses broadcast markets through a pan-European footprint delivering wide coverage and four regional footprints serving Germany, Greece, Italy, and the Nordics with the Baltics and Ukraine.

Eutelsat 9B also marks an industry first as the host satellite for the inaugural data relay payload for the European Data Relay System (EDRS) being implemented through a Public Private Partnership (PPP) between ESA and Airbus Defence and Space.

Having completed its mission at 9° East, Eutelsat 9A will continue in full commercial service at an alternative orbital position.

Wi-Fi 6 and Wi-Fi 6E client devices are entering the home in an unprecedented way, surpassing 50% market share since their introduction in 2019 (compared to four years for Wi-Fi 5). … END_OF_DOCUMENT_TOKEN_TO_BE_REPLACED