Despite the widespread availability of inexpensive ancillary TV streaming devices, new TDG research finds that 32% of OTT TV Users prefer having the native connectivity of a smart TV.

This is according to data featured in TDG’s Video Behavior in the Age of Quantum Media, a survey of 2,000 US adult broadband users, 60% of which use an over-the-top (OTT) streaming service on a home television.

When asked which TV streaming platform they prefer, 32% of OTT TV Users selected their smart TV. Interestingly, this is pretty much equal to the penetration of smart TVs in general. 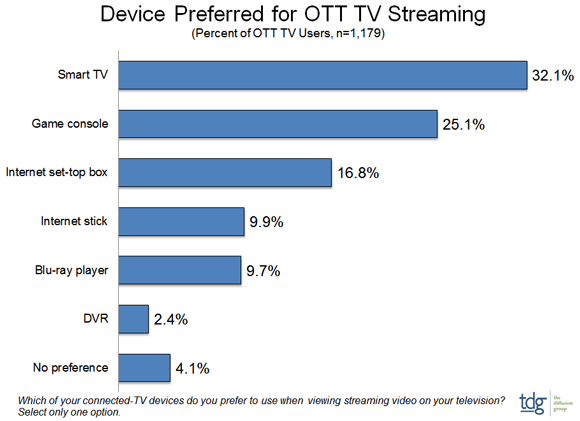 Why do smart TVs top the list? According to Michael Greeson, director of research at TDG, this likely boils down to ease of use. “With smart TVs, viewers are not required to manually switch inputs from the TV to another device or pick up a different remote in order to access their favorite streaming apps and programs.”

Wi-Fi 6 and Wi-Fi 6E client devices are entering the home in an unprecedented way, surpassing 50% market share since their introduction in 2019 (compared to four years for Wi-Fi 5). … END_OF_DOCUMENT_TOKEN_TO_BE_REPLACED