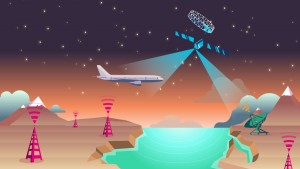 The European Aviation Network will combine satellite connectivity from a new Inmarsat S-band satellite with an LTE-based ground network developed and operated by Deutsche Telekom and to provide passengers with a customer experience similar to the comfort of high-speed broadband at home, according to the partners.

Lufthansa will be the first European airline to make use of the hybrid solution. In early summer 2016, the German company will at first launch a satellite-based broadband service on board its short and medium haul flights across Europe based on technology provided by Inmarsat. Building on this relationship, Lufthansa will run a flight trial programme of the new LTE/satellite service from 2017 onwards.

“This bold step will make Deutsche Telekom the first telecommunications operator to take the advantages of LTE technology to the European airspace and fits perfectly into our strategy to become the leading European telco,” said Tim Höttges, CEO of Deutsche Telekom. “As a groundbreaking innovation, we will roll out a powerful terrestrial network based on LTE within the European Aviation Network. This will be the first aviation connectivity network in Europe powered by both LTE and satellite combined!”

It is combined on the ground with a new pan-European mobile broadband network of around 300 LTE sites to be built and managed by Deutsche Telekom. The LTE sites will have a range of more than 80 km (while conventional LTE sites have a range of 10 km or less) and will be able to transmit data to the operating altitude of passenger planes.

Once the aircraft has reached 10,000ft, Deutsche Telekom’s ground network will be combined with the satellite connectivity. The switching between the satellite and the ground will be automatically managed by the cabin systems without noticeable interruption of the service delivered on board, according to the partners.

Wi-Fi 6 and Wi-Fi 6E client devices are entering the home in an unprecedented way, surpassing 50% market share since their introduction in 2019 (compared to four years for Wi-Fi 5). … END_OF_DOCUMENT_TOKEN_TO_BE_REPLACED