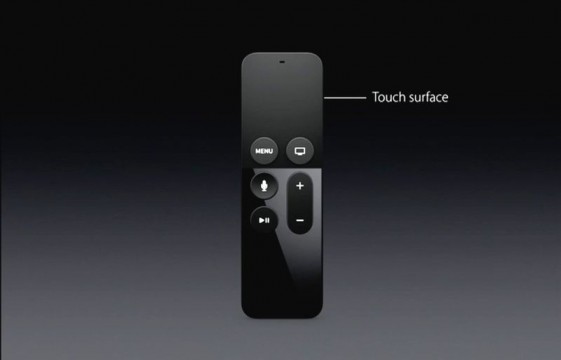 Apple CEO Tim Cook has unveiled the new Apple TV, ten millimeters taller, with an updated remote, and with a built-in App Store.

“It’s the golden age of television, but the television experience has been virtually standing still,” said Cook. “Today, we are going to do something about that. It starts with a vision. Our vision for TV is simple and perhaps a little provocative. We believe the future of TV is apps.”

The new Apple TV is much more powerful than its predecessor, powered by a 64-bit A8 processor and supports 802.11ac Wi-Fi and Bluetooth 4.0. It will launch in late October in two configurations: 32GB for $149 or 64GB for $199. The device runs on new software is called tvOS, based on iOS and is available to developers today.

The built-in app store will feature games, a new area for the set-top, and Apple is hoping for third-party developers to start offering new games. Some are already in development including Galaxy on Fire, Rayman Adventures, Disney Infinity 3.0 and Guitar Hero Live.

In terms of TV programming, the New York Times reports that entertainment and sports management company WME/IMG will debut a new fashion-only network called Made 2 Measure in October, debuting on Apple TV.

The new version of the MLB app features full HD video at 60 frames-a-second of a variety of games as well as a deep dive into stats and the ability to watch two games at a time. The NHL will also be launching an app in 2016.

Broadband TV Views. So far, Apple TV 4.0 is not the game changer we would expect from Apple. This box is not going to change the way we watch television and Apple will have a tough time fending off the much cheaper competition.

The big news is the introduction of the app store, which makes it possible for any third party to develop tvOS apps, much like now for iOS and MacOS. However, Google is way ahead with the apps for its much cheaper Chromecast HDMI dongle.

Wi-Fi 6 and Wi-Fi 6E client devices are entering the home in an unprecedented way, surpassing 50% market share since their introduction in 2019 (compared to four years for Wi-Fi 5). … END_OF_DOCUMENT_TOKEN_TO_BE_REPLACED