A key finding is that Video-on-Demand (VOD) services are succeeding in meeting consumer needs, thus allowing consumers to change their viewing habits. Consumers now spend six hours per week watching streamed on-demand TV series, programs, and movies – this has more than doubled since 2011. With recorded and downloaded content added to the equation, today 35% of all TV and video viewing is spent watching VOD. 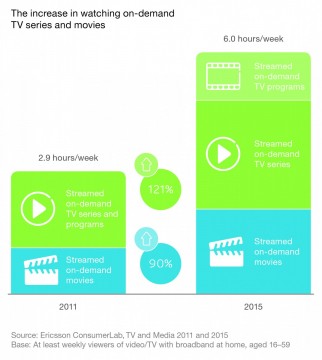 At the same time, user-generated content (UGC) platforms account for a growing share of consumers’ TV and video viewing. Close to 1 in 10 consumers watch YouTube for more than three hours per day, and one in three now consider it very important to be able to watch UGC on their TV at home. In addition, the study finds that the increasing prominence of UGC-rich platforms, like YouTube, has resulted in a popularity boost for educational and instructional videos, with consumers watching an average 73 minutes of these videos per week.

Anders Erlandsson, Senior Advisor, Ericsson ConsumerLab, says: “The continued rise of streamed video on demand and UGC services reflects the importance of three specific factors to today’s viewers: great content, flexibility, and a high-quality overall experience. Innovative business models that support these three areas are now crucial to creating TV and video offerings that are both relevant and attractive.”

Other significant findings from the Ericsson ConsumerLab TV & Media Report 2015 include:

Bingeing is changing the game: Watching multiple TV episodes in a row has rapidly become a key part of the TV and video experience. This habit is prominent among Subscription Video-on-Demand (S-VOD) users of services such as Netflix, Amazon Prime, and HBO, of whom 87 percent binge-view at least once a week.

The difficulty of finding content: Half of consumers watching linear TV say they can’t find anything to watch on a daily basis. Consumers feel that recommendation features are simply not smart or personal enough.

Different bundles, different attitudes: Twenty-two percent of consumers who have never had a pay-TV subscription are already paying for over-the-top (OTT) content services.

Linear TV remains key: The popularity of linear TV remains high, mainly due to the access it gives to premium viewing and live content, like sports, as well as its social value. In this respect, linear TV often acts as a ‘household campfire’.

Wi-Fi 6 and Wi-Fi 6E client devices are entering the home in an unprecedented way, surpassing 50% market share since their introduction in 2019 (compared to four years for Wi-Fi 5). … END_OF_DOCUMENT_TOKEN_TO_BE_REPLACED