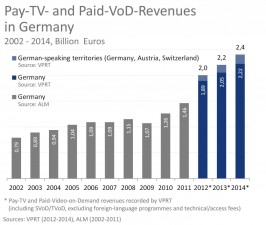 In Germany, Austria and Switzerland, the turnover reached a total of €2.4 billion. The figures were released by VPRT, the German commercial broadcasters’ industry association, in its new study Pay-TV in Deutschland 2015.

The increase is mainly based on considerably risen subscriber figures. The number of pay-TV customers climbed by 10% to 7 million in Germany and 7.7 million in Germany, Austria and Switzerland in 2014. VPRT expects further subscriber growth in 2015: For the first time, more than 20% of German households will then have a pay-TV subscription.

The pay-TV channels invested a total of more than €1 billion into their programming in 2014 with an increasing amount spent on original productions.

Wi-Fi 6 and Wi-Fi 6E client devices are entering the home in an unprecedented way, surpassing 50% market share since their introduction in 2019 (compared to four years for Wi-Fi 5). … END_OF_DOCUMENT_TOKEN_TO_BE_REPLACED